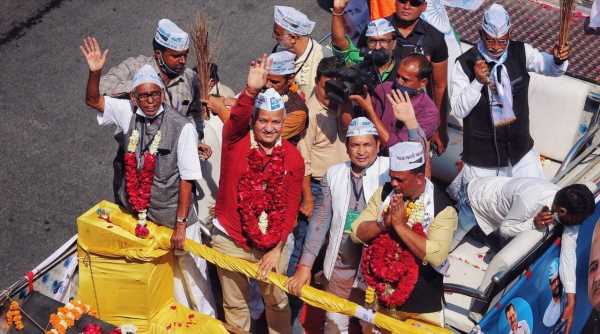 Says only AAP has substance to defeat the BJP and it has proved it twice. Autorickshaw drivers, students and civil society activists sporting ‘jhaadus’ — broom is AAP’s election symbol — and sporting face masks of Arvind Kejriwal, the Delhi CM, rode bicycles, motorcycles, cars and buses as the roadshow, which started from Hatkeshwar area in Ahmedabad, moved towards the old city areas of Behrampur, Jamalpur, Raipur Darwaza, Saraspur, Rakhial, Juhapura and Bapunagar. Sisodia, riding atop a bus, led the convoy and was seen greeting the public.

In Gujarat, the polls to the six municipal corporations in Ahmedabad will be held on February 21, while the elections to 81 municipalities, 31 district panchayats and 231 taluka panchayats will be conducted on February 28. While the fight for dominance in local body polls has historically been between the Bharatiya Janata Party and the Congress, this year AAP and AIMIM have also jumped into the fray with their full might.

Earlier in the day, Sisodia addressed a press conference in Ahmedabad wherein he attacked both the ruling and main opposition parties.

“Only AAP has the substance to defeat the BJP and it has proved it twice. In Gujarat, we don’t see ourselves as the third alternative to the BJP and the Congress, as we see both of them as one. People know that Congress has lost all credibility in Gujarat and they have no might over here. Has the Congress held any andolan (agitation) against the BJP in the past 25 years? People give a vote to the Congress only when they get angry with the BJP and later those Congress MLAs switch over and join BJP. Whosoever becomes a councillor from BJP, they first try to get their own business sorted,” he said.

Sisodia alleged that despite being in power in municipal corporations for 25 years, the BJP could not ensure strong health care and school infrastructure for the urban population, unlike the Arvind Kejriwal-led AAP that ensured it through mohalla clinics and government schools.

Delhi CM Arvind Kejriwal, Sisodia said, could not be in Gujarat due to the ongoing farmers’ agitation against the three new agriculture laws in the National Capital Region (NCR). “Why is the BJP favouring a few corporates and keeping aside the welfare of farmers in this country by bringing such laws? Kejriwal ji is stationed in Delhi right now to take care of our farmer brothers.”

Some farmers from Gujarat are also camping in Delhi to present their points on farm laws, the AAP leader added.

As the roadshow progressed, AAP’s volunteers emerged from their houses and joined the convoy with their own vehicles.

Bhimrao Sapkle, a daily wage labourer who is one of the candidates for AAP in the local municipality polls from Ramol Hathijan ward no 48, said: “People in my locality are fed up with both the BJP and the Congress. We face basic drinking water and sewage problems in our area and the rulers have not done much about it. There is not a single public toilet in my locality.”

An autorickshaw driver Dinesh Mansawala said he joined the AAP two months ago when volunteers came to his house for campaigning. “I am fed up of BJP and Congress, as we autorickshaw-wallas have been taken for granted. This time autorickshaw drivers will vote for AAP, as they did in Delhi,” the Asarwa resident said.

RS Yadav, an AAP sympathiser, feels despite being a young party, AAP has the done most groundwork already in Ahmedabad. “Other parties are ashamed of going to shanties and slums as they think poor people don’t vote. This time it will be different,” he said.