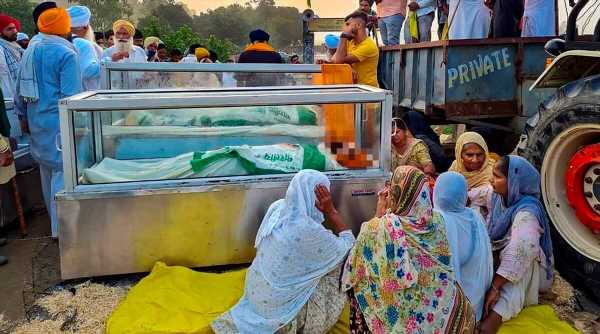 Virk said that Union MoS Ajay Mishra’s son, Ashish Mishra, was driving one of those vehicles — and that he was targeted for leading the protest that day against the Minister’s remarks about farmers the previous week. Samyukt Kisan Morcha (SKM) leader Tajinder Singh Virk, who was seriously injured in the Lakhimpur Kheri incident, said Wednesday that he “heard gunshots” before losing consciousness, after being hit by one of the three vehicles that ploughed into a group of protesters Sunday, killing four farmers.

Virk said that Union MoS Ajay Mishra’s son, Ashish Mishra, was driving one of those vehicles — and that he was targeted for leading the protest that day against the Minister’s remarks about farmers the previous week.

Virk, who heads Terai Kisan Sangathan, was admitted in Medanta hospital in Gurgaon at 4 am Monday and underwent surgery for a skull fracture. The condition of the 47-year-old, who also suffered injuries on the face and spine, is now stable.

UP Police have registered two FIRs in the case: one on murder charges against Ashish Mishra and another against unidentified miscreants for the violence following the incident that led to four more deaths.

“I was walking with some protesters and talking to a person, who was recording my remarks on camera, when suddenly a Thar hit me at high speed from behind and dragged me for over 15 feet. Ajay Mishra’s son, Ashish, was driving the Thar. I was thrown off to the side of the road in muddy water. My turban came off and I was bleeding heavily from the head,” he said.

Virk said that at this point, he “heard gunshots” and alleged that they were fired upon by men accompanying Ashish Mishra. “A minute later, I felt dazed and lost consciousness. Their plan was to shoot me. They had conducted a recce of the road earlier. I was distinguishable among the crowd since I was wearing a red turban. I suspect that in the chaos after the vehicle mowed down the protesters, they could not identify me when I was lying on the roadside,” he said.

“I was targeted since I had given the call for the protest in (Ajay Mishra’s) constituency. He had threatened the farmers with dire consequences and stated that if he displayed his true power, farmers would be forced to leave the state. There was outrage among farmers due to this remark. In this context, a peaceful protest to show black flags had been organised against Deputy CM Keshav Prasad Maurya’s visit to Banveerpur (Mishra’s village),” Virk said.

Explaining the sequence of events that unfolded on October 3, Virk said that at 9.45 am, farmers carrying black flags had assembled at Guru Nanak academy in Tikunia. “We had information that the Deputy CM’s helicopter would land at a helipad on a local ground. So, we occupied the helipad and sat there for the protest till the afternoon. At 2.45 pm, from the police and district magistrate, we learnt that the Deputy CM’s route had been diverted. So, we decided to end the protest and started to disperse,” he said.

Virk said some farmers had started to walk towards their vehicles that were parked at a distance to return to their villages when the incident occurred. Referring to a 29-second video of the incident, Virk said he has seen the clip several times on the phone over the last two days.

“This is clear evidence that the farmers, who were walking peacefully, were attacked and killed. In the video, I can be seen in a red turban, walking alongside another protester, who is carrying a black flag, as the camera pans to footage of the Thar mowing down protesters from behind us. If the video had not surfaced, the authorities would have succeeded in changing the narrative and blaming the farmers, which is being done to an extent. The protesters did not instigate anyone and neither did they pelt stones,” he said.

On the violence by protesters, which led to four other deaths, he said: “In retaliation, a car was set on fire, but our volunteers handed over three people indulging in violent acts to the police.”

Virk demanded that Union MoS Mishra be sacked and his son arrested at the earliest. “There should be a judicial probe for a fair investigation. I do not have faith in this government. It has been three days and no arrests have been made. If there is no action, it implies that the government is shielding the accused. They are stopping Opposition leaders from visiting the area. I have been told there is a complaint against me,” he said.

10/07/2021 Cities Comments Off on From hospital bed, farm leader says: I was targeted, I heard shots
India