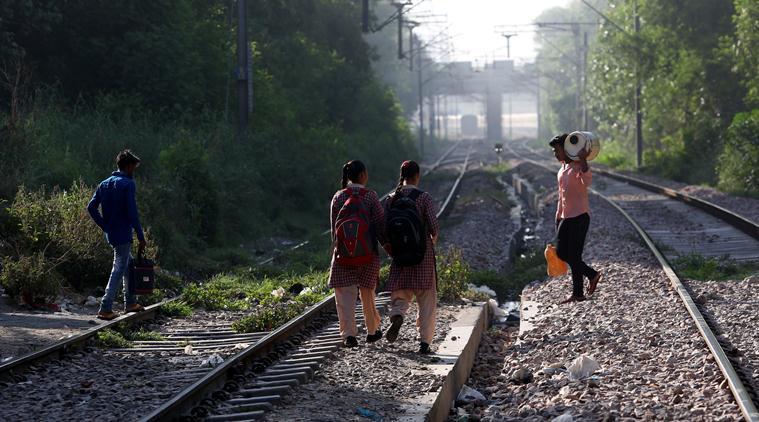 Last year, 400 children from the settlement had signed a petition to the Railways, initiated by the Kailash Satyarthi Children's Foundation (KSCF), requesting the setting up of a foot overbridge at the point where the children cross the tracks. Every morning, nine-year-old Khushi becomes guardian to her five-year-old sister Anshika as they hold hands and cross the railway tracks to reach school. The sisters leave home at 7 am with school bags larger than their torsos. The 2-km route they navigate by foot to reach school every day includes walking past a railway crossing and through the lanes of an industrial area used by mini trucks and carrier vehicles.

The sisters’ family are residents of Prem Nagar, an unauthorised colony in Outer Delhi. With an approximate population of five lakh, the area does not have a single Delhi government school. The only state school here is run by the municipal corporation, and ends in class V. The closest government school, in Mundka, is between 1.5 and 2.5 kilometres away depending on which part of the colony a family resides in. The school falls across a railway track.

So every morning, children from the settlement head to the Mundka school, or government schools in Nangloi, Mubarakpur, Nithari and Paschim Vihar. “Obviously it is terrifying for me when my children leave for school but it’s something we do out of compulsion for them to get educated. My husband goes out to work and I have a one-year-old child I need to look after, so I can’t go with them. Most parents only breathe easily after their children return home in the afternoon,” said Savita, Khushi and Anshika’s mother.

In October last year, a 14-year-old boy, Vishal, had died when a vehicle ran over him while he was on his way back from school in Mundka.

His mother Ramavati recalls that she had stopped fearing for his safety because he had been travelling the same route every day since primary school. “He used to ride a cycle, and we always told him to try and use inner lanes as much as possible. We found out about the accident after he was taken to the hospital, and there was nothing much we could do to save him,” she said.

News of the accident has only added to the fear children have about their daily commute. “It’s so scary to cross the road. I travel every day but I am scared every day. Sometimes the crossing is closed because of a train and we have to wait and get late for school. Then we get punished by the teacher. The worst is during the rainy season when the slush makes the walk past the crossing even more difficult and it takes 50 minutes to reach school. I wish a school would open in our area,” said Priya, a class IX student in the Mundka school.

A case is currently being heard in the the High Court to get a government senior secondary school built in the area for children of Prem Nagar. The petition was filed by local NGO Hamara Prayas Samajik Utthan in March, and last month, the court directed officers of the Delhi government and the Delhi Development Authority (DDA) to visit the area and give suggestions on the feasibility of establishing a school in the area. Last week, the DDA communicated to the petitioners: “As soon as all formalities are completed, the process of allotment of land to the Directorate of Education… for Senior Secondary School at the site mentioned above will be processed.”

In Chanakyapuri, one of the most high-profile localities in the capital, hundreds of children walk across an unmanned railway track every day to get to school.

Lakshman, with his hair parted neatly to a side, makes his way down the rock steps which lead to the railway track behind the settlement.

He nods when asked if the track scares him. “I’ve fallen down these steps as well so many times during the monsoon. But there’s no other way to walk to school,” he said.

These children are residents of Sanjay Camp — a sprawling

JJ colony with 3,200 jhuggis hidden behind the embassies of Chanakyapuri. The children of the settlement study in five Delhi government and New Delhi Municipal Council (NDMC) schools located across the track in Moti Bagh.

Some children from the settlement, like 13-year-old Pooja, study in an NDMC school in Bapu Dham, which does not require them to cross the track. However, these are few in number as the school is much further than the Moti Bagh schools, and Pooja walks 20 minutes to get to school every day. She had studied at one of schools across the track in Class II, but her mother, upset about her having to cross the track, shifted her to the Bapu Dham school.

Twelve-year-old Soni said she has seen many things which make her concerned about the safety of children who go to school with her. “Many times, when we are on our way to school or on the way back, there is a train halted on the track. We wait for the train to leave, but sometimes, if the children are in a hurry to get to school or they feel it’s too hot to wait, they just crawl under the train to get to the other side, and that is terrifying. Also, children as small as four years old go to the schools as well, and sometimes their feet get stuck in the tracks and they fall,” she said.

Last year, 400 children from the settlement had signed a petition to the Railways, initiated by the Kailash Satyarthi Children’s Foundation (KSCF), requesting the setting up of a foot overbridge at the point where the children cross the tracks.

“We did not receive a response. This year, we are planning to send across another petition once the summer vacation ends,” said Sarita, a representative of the foundation in Sanjay Camp.

“It is one of the most important things for children of the colony right now. If there’s a foot overbridge, the children will not have to do such dangerous things to get to school and they will stop getting late because of hold-ups at the tracks. One thing that I believe is that since teachers do so much for children and look after them in school, they should also look at how they get to school and try to do something to help them,” said Pooja, who is also the up-sarpanch of the Bal Panchayat recently constituted in the locality by the KSCF.

However, the principal of one of the schools said they cannot do much to help the children. “We cannot alter geography. All we can do is ask them to use another route which does not require them to cross the track,” she said.