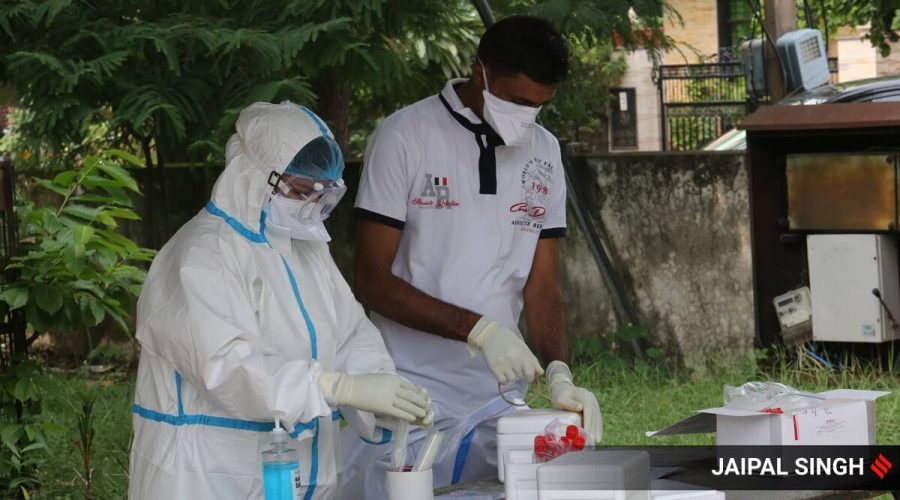 CMO Panchkula, Dr Jasjeet Kaur, spoke to Pallavi Singhal about the disease progress, the obstacles faced and what the future holds. AS DEATHS in Panchkula crossed the 100-mark on Thursday, the district figured in the top five in Haryana to reach the grim milestone, after Faridabad, Gurgaon, Ambala, and Karnal. CMO Panchkula, Dr Jasjeet Kaur, spoke to Pallavi Singhal about the disease progress, the obstacles faced and what the future holds.

Panchkula had witnessed only two deaths by July end, and the number continuously increased to reach 86 on September 30. How does the department assess them?

If we look at the whole picture since it began, we had tested a total of 19,370 samples till July end. In June, when unlock began, we started focusing on demographic and area-wise sampling where we specifically targeted travellers as we had controlled travel back then. We had a positivity rate of approximately 3.8 per cent then. All of this had kept the cases low, thus reporting zero casualties.

Then on, as cases grew, we started sampling more by July. Yet only two deaths had been reported by July end.

As cases started growing in August, we dramatically ramped up sampling, to pick up cases early. In August alone we sampled more than 19,000 people, and the positivity rate was touching almost 10-15 per cent. As a result, deaths also rose and from two we reached 18. Total of 20 deaths had been recorded by August end.

Further, as we witnessed the peak in September, we consequentially sampled as many as 23,000 people within the month. Positivity rates went up as high as 25 per cent on some days, while remaining stable at 20 per cent per day. Thus, correspondingly, we recorded 66 deaths in the month of September alone.

Even though cases in district have seen a gradual decrease in the past ten days, why have the deaths remained consistent?

The deaths are a direct result of rise in cases. So, the cycle goes like—when the positivity rate rises, infection is spread in the first week, then inflammation starts in those infected but not isolated/diagnosed by the second week. The deaths are thus generally reported in a week to ten days as serious cases start going into mortality. This gap always exists.

So, the number of positive cases has started decreasing only right now, but the patients already sick, especially ones who are serious, had been reported in the previous cycle itself.

Clinically speaking, a person’s inflammatory response kicks off in a week and thus the deaths will not decrease right now. If the numbers remain consistently low, the deaths will correspondingly decline in almost two weeks.

We have crossed 100 now, but the number of deaths has also come down. From reporting 4-5 of them every day, we are now reporting 1-2 every day. Hopefully if the decline continues, deaths should decrease in the coming days.

Can the lesser number of cases be a result of decreased sampling?

Even though the sampling had been reduced for almost a week in the intervening days of September and October, we have now resumed it to maximum.

It had not been decreased significantly. From an average of conducting 1,300 tests per day in September, we are now conducting 900-1000 tests a day. The reduction in cases can thus not be blamed upon decreased sampling.

I also feel that the sampling has come down due to people being reluctant in getting tested despite our best efforts. We are trying to encourage them to come forward through several ways, including surveys and by taking sampling centres to them. Meanwhile our positivity rate has also gone down to 7-8 per cent.

There have been instances where deaths have been reported later than they happened. Why?

We report deaths only after an assessment of cases, and thus, several times, the numbers are added not on the day the deaths occurred, but later. We want to be very sure before reporting that a death is related to the virus.

At least four young deaths have been reported in the district. What do you have to say about that?

The 14-year-old boy had reported with severe abdominal pain and was on the verge of collapsing when he reached us. He died within a few minutes of coming to the hospital. As per protocol, we had to test everyone and we feel he was only coincidently Covid-19 positive, and that was not the prime reason for his death. The cause of death is suspected to be acute abdominal pain. We added him to the tally because he tested positive.

The 26-year-old had reported with morbid obesity and was suffering from hyperthyroid. The cytokine storm increases a lot in such cases. The 34-year-old’s death was a late reported case. He kept on delaying reporting and by the time he did, we could not do much. The 23-year-old woman was suffering from cardiac disease.

Can you tell us about the most common co-morbidity found and about those who had no reported comorbidities yet succumbed to the disease?

The most common comorbidity we find is diabetes. Patients pf chronic kidney diseases also remain more vulnerable. A lot of persons who passed away were on dialysis.

Of total 100, only five deaths were without co-morbidities. The reason of death in such cases can be many. A lot of times a person may have an undefined co-morbidity, like diabetes that was never diagnosed. They may be immune-compromised, under nutrition or may just have an unknown reason for a general low immunity.

All of us have varied kinds of resistance to pathogens. Some may be affected severely, while others may do well. All of our bodies have varied constitutional resistance capacity. That may also be a reason.

Panchkula had suffered a shortage of ICU beds. How did we manage our cases then?

There was definitely a time when we were under immense pressure for ICU beds as we were catering to patients of the whole region. The whole north Haryana including Karnal, Kurukshetra, Yamunanagar, Panchkula, Ambala et al, peaked suddenly. We then had to take care of patient load from Panchkula, Chandigarh, and certain areas of Punjab as well as cities right upto Karnal. Almost two mid weeks of September were the peak.

We tried our best—we gave beds wherever they were available. We did face a shortage at that time because of the lack of a medical college in the district.

Depending on private hospitals and dealing with them was not always easy. They had their own apprehensions as well. Later we got to know that they had made some added arrangements for ICU beds which were not revealed to us. We took those over after got to know about them.

Despite the Haryana government capping rates for covid treatment at private hospitals, several cases have been reported in Pacnhkula, where people were charged lakhs for basic treatment. Has the health administration taken cognizance of such cases?

While all government hospitals are free, private ones have been instructed to charge a maximum of Rs 18,000 per day.

The rule applies to not just to people with domicile of Haryana but other states as well. The capped rates are applicable to any person admitted in Panchkula, on beds under our requisition in our ICU.

Some people did reach out to us, about the high rates charged from them and we have recommended returns on those bills. We have tried our best to satisfy claims wherever an excess was filed. We have got bills revised and even issued warning. Anyone who faces such issues can directly approach us.

How do you see the graph of pandemic here on out?

A second peak is inevitable, but we don’t know when we will reach it. However, whenever we do, we will be ready for it.

10/10/2020 Cities Comments Off on Covid deaths in Panchkula district should come down in the coming days, says CMO
TV & Movies