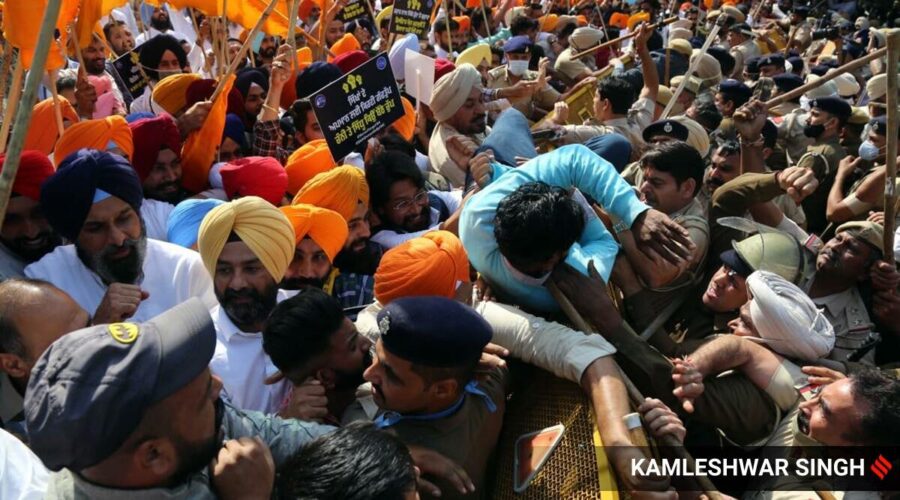 The party had hit the streets to press for various demands, including adequate compensation for cotton crops and reduction in VAT on fuel prices At least two dozen people were injured on Saturday when hundreds of Shiromani Akali Dal (SAD) workers were lathicharged and pushed back by security personnel as they tried to gherao the residence of Punjab Chief Minister, Charanjit Singh Channi, in Sector 2 to press for various demands.

Sources said all the injuries sustained — by both the protesters and the police personnel — were minor with only a handful had to be rushed to GMSH-16 for treatment. According to the SAD, their party workers hit the streets on Saturday to demand a compensation of Rs 50,000 per acre for cotton growers and a reduction in the state VAT on petrol and diesel by at least Rs 10 per litre. The protesters said they also wanted to question Punjab CM, Channi, and the state’s Congress chief, Navjot Singh Sidhu, why they had not opposed the allotment of a top post in their party to 1984 genocide perpetrator, Jagdish Tytler.

SP (city) Ketan Bansal said, “We have lodged an FIR against certain leaders and unknown workers of the SAD. The FIR was registered for violating the administration’s instructions. Around a dozen cops, including some officers, received minor injuries. The case was registered at PS 3. Adequate security arrangements were made. The number of SAD workers who clashed with the police is estimated to be around 2,500.” Police said that the SAD workers had arrived in buses, SUVs, and other vehicles from throughout Punjab and assembled at different locations of the city in the morning. Adequate security personnel, estimated to be thousands in numbers, were deployed from various units — including police lines, IRB, Crime branch, Operations cell, and from local police stations — to ensure law and order in the area.

Later in the day, SAD president, Sukhbir Singh Badal, who led the protests, condemned the lathicharge, deeming it as part of a conspiracy to prevent people from raising their voice against the corrupt Congress government, which was indulging in open loot and plunder of the state’s resources. He demanded that all false cases against them are withdrawn immediately and a probe be launched in the unprovoked attack on Akali workers.