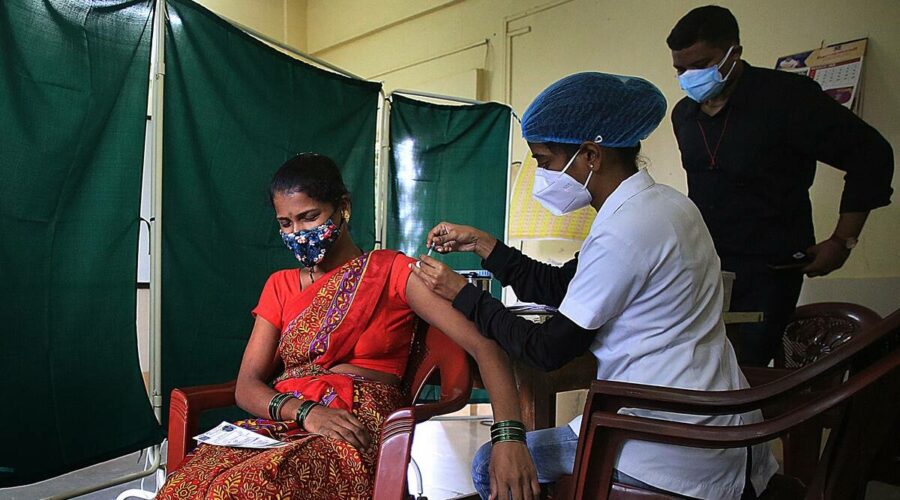 Although Maharashtra has administered 10 crore doses, only 40 per cent of the eligible population is fully immunised. Following a meeting with Prime Minister Narendra Modi on November 3, districts in Maharashtra have opted for coercive techniques to boost vaccination. Officials claim that the strong-arm tactics have improved mass inoculation, especially in rural areas.

Although the state has administered 10 crore doses, only 40 per cent of the eligible population is fully immunised. With the flattening of the pandemic curve, many districts are lagging in vaccination. Earlier this month, the Prime Minister held a meeting with the representatives of six districts — Aurangabad, Hingoli, Nanded, Akola, Buldhana and Nandurbar — which had then recorded one of the smallest rates of single dose vaccination among the eligible population in the state.

In the meeting, Modi advised the district collectors to ‘think outside the box’ to ensure 100 per cent of the population is vaccinated with at least one dose. Several districts then imposed coercive rules, including issuing orders to stop food ration supply for unvaccinated people, threatening non-payment of salary to government employees and prohibiting petrol pumps from selling fuel.

Officials said that since the imposition of coercive techniques, first dose vaccination rates in these districts are inching toward 65 per cent, up from 50 per cent recorded in the first week of November.

Sunil Chavan, district collector of Aurangabad, said, “This is for the overall welfare of the public. In the past 15 days, we have been able to vaccinate nearly 3.5 lakh people. With the lifting of restrictions, people haven’t been violating Covid-appropriate behaviour. So, it is essential to vaccinate as many people as possible before we get hit by a third wave.”

Similarly, daily vaccinations increased from 4,000 to over 7,500 in Hingoli. With rise in vaccination, Hingoli Collector Jitendra Papalkar believes that by the end of December, they will be able to reach 100 per cent immunization.

“We have been recording a 1 per cent rise in vaccination every week. Now, we are planning to target 2 per cent per week,” said Papalkar. “Despite knocking at people’s doors, they didn’t show up for vaccination. So, arm-twisting is the only option left for us,” he added.

Like Jalna, Hingoli district has also declared that unvaccianted government employees won’t get salaries until they and their families get vaccinated with at least one shot. Papalkar is now planning to install vaccination booths in front of wedding functions to encourage people to take the jab.

Citing an example of Mumbai, a senior health officer said when the local trains were opened up for fully vaccinated beneficiaries, people started flocking to vaccination centres.

“Vaccination is not mandatory but somehow or the other, we have to motivate people to get the jab. When the pandemic was at its peak, people were rushing for vaccination. So, we have to give some push to the public to take the jabs,” said the officer.