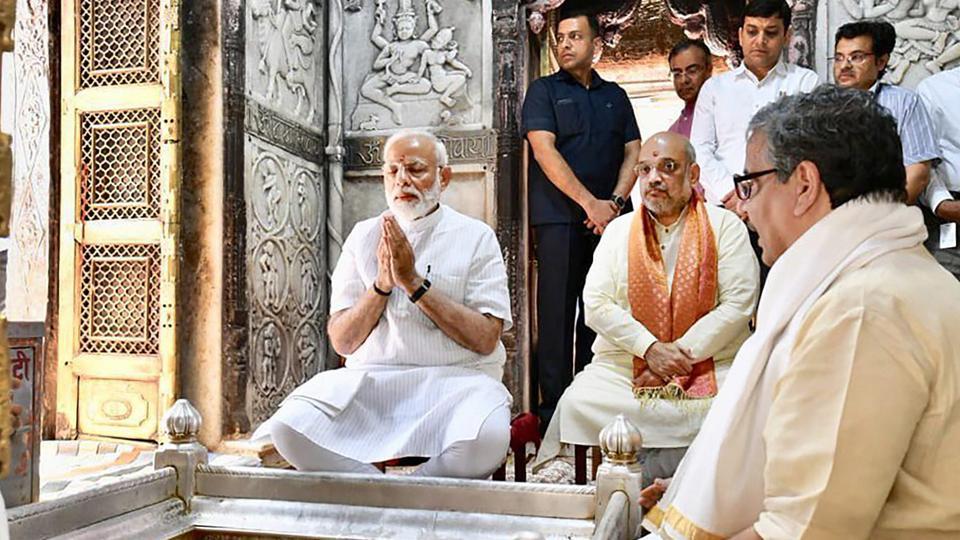 Chemistry has triumphed over poll arithmetic, Prime Minister-elect Narendra Modi said on Monday, thanking the voters of Varanasi for electing him by a huge margin in the summer Lok Sabha elections.

Addressing Bharatiya Janata Party (BJP) workers during a thanksgiving visit to his constituency Varanasi after winning from the temple city by nearly 5 lakh votes and leading the National Democratic Alliance (NDA) to a resounding victory in the 17th Lok Sabha elections, Modi decried the “misconception” being created that the BJP was a Hindi heartland party and said the Lok Sabha poll results testified to its victories across India.

“Political pundits are not aware that their thinking and logic is meant for the 20th century. Results show that beyond arithmetic there is chemistry and this time chemistry has triumphed over arithmetic,” the Prime Minister told his electorate while thanking them profusely for their hardwork and dedication.

Uttar Pradesh is giving new direction to politics, he said, giving the examples of the 2014, 2017 and 2019 polls. The BJP won 71 out of 80 parliamentary seats in the state in the 2014 Lok Sabha polls and 325 assembly seats out of 403 in the 2017 polls. In the 2019 general election, the saffron party swept 62 seats, even with regional stongholds Bahujan Samaj Party and the Samajwadi Party forming an alliance.

This, the BJP leader said, was no small achievement.

“For the country, I am the PM, but for you I am your MP, I am your sevak,” he told the Varanasi electorate. Modi will be taking oath as the prime minister for the second time on May 30.

Varanasi was decked up to welcome Modi, with several streets lined up with BJP flags and posters.

Admitting that politics is about perception, Modi lamented that a wrong impression had been created about his party through lies and wrong logic.

“Because of this wrong awful perception, people do not like standing with us. But those creating bad and wrong perception can be defeated with the help of transparency and hard work. This is the strategy to trounce it,” he said.

Work and workers create wonders, he said, giving full credit for his victory to the workers at the grassroots level for creating awareness of his government’s policies and programmes for the people.

Earlier in the day, Modi visited the famous Kashi Vishwanath temple in the city and offered prayers. He was accompanied by BJP president Amit Shah and Uttar Pradesh chief minister Yogi Adityanath.

Modi also spoke about the political killings in the country. “Take the cases of Kerala or Kashmir, Bengal or Tripura, [these cases] will not come in media. Some people have selective sensitivity. Hundreds of workers have been killed only for political ideology. In Tripura, workers were hanged, in Bengal murders are still on, in Kerala too… perhaps in India only one political party has faced such killings. Violence has been given legitimacy. This is a danger before us,” he pointed out.

His remarks assumed significance in light of the killing of a BJP campaigner in Amethi on Sunday in what was the first post-poll related killing in Uttar Pradesh.

The prime minister elect said he was also grateful to his opponents who fought against him. “When others come to power, there is no sign of opposition,” he said, stressing on the significance of the Opposition in a democracy:

BJP president Amit Shah said Modi has only shown a glimpse of development and Kashi, as Varanasi is also called, will turn into an amazing city in the next five years. Hinting at the SP-BSP-Rashtriya Lok Dal (RLD) alliance, he said some media houses were predicting Modi will not get clear majority but the party successfully gave a call for working on achieving 50% vote share.

Both Shah and Adityanath, in their speeches, focused on the “gruelling” campaigning Modi undertook in the run up to the general elections.