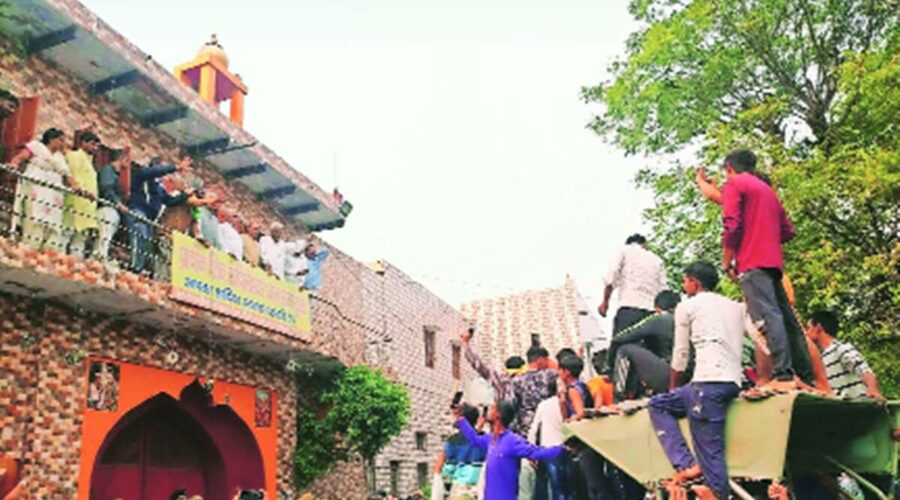 As soon as the farmers came to know of the BJP leaders’ visit, they started camping outside the temple, demanding an apology from them for visiting the temple despite their “social boycott” over the issue of the three farm laws. Farmers’ protests took a violent turn in Haryana on Friday, with BJP Rajya Sabha MP Ram Chander Jangra’s car attacked in Hisar district, while senior party leaders were confined at a temple in Rohtak district for around seven hours by agitators.

In the first incident, Jangra was visiting Hisar’s Narnaund town to lay the foundation stone of a dharmshala. When protesting farmers came to know of his presence, they started gathering there and raised slogans against him. Police installed barricades to halt the movement of the protesters, but they succeeded in surging ahead and allegedly attacked the MP’s car and smashed its windscreen.

Jangra, who was sitting in the car at the time, has blamed the protesting farmers for the damage, alleging “an attack on him”.

The farmers have alleged that “BJP goons” attacked them, resulting in one protester receiving serious injuries. Local farmer leader Ravi Azad said farmer Kuldeep Rana received serious injuries and has been admitted to a hospital in Hisar. The farmers sat in the Narnaund police thana and have called a panchayat there on Saturday demanding an FIR against Jangra and his associates apart from withdrawal of the FIR lodged against the protesting farmers.

However, police have claimed Rana sustained injuries “after falling into a nullah”.

Narnaund DSP Jugal Kishor Ram told The Indian Express, “No police lathicharge took place. He (Rana) received injuries when he fell into a street nullah… We detained two of the farmers for breaking the windscreen of an MP’s car.” Quoting a doctor who is treating the farmer, Hansi SP Nitika Gahlaut said he does not have any external injury on his body. The police also said the farmer had fallen unconscious after a head injury.

In the second incident, agitating farmers confined a number of BJP leaders at a temple in Rohtak’s Kiloi village. The BJP leaders were in the village to watch the live telecast of Prime Minister Narendra Modi’s visit to the Kedarnath shrine in Uttarakhand.

As soon as the farmers came to know of the BJP leaders’ visit, they started camping outside the temple, demanding an apology from them for visiting the temple despite their “social boycott” over the issue of the three farm laws.

Senior administrative officers reached the spot and held meetings with the farmers, who refused to budge.

A source said: “Laying siege around the temple, the farmers also parked their tractor-trolleys on the streets leading to the temple. The farmers wanted an assurance from the BJP leaders that they won’t enter the village till the farmer agitation does not end.”

The agitators claim the BJP leaders were allowed to leave after seven hours — after they expressed an “apology”.

In a video that emerged on social media, Haryana BJP vice-president Manish Grover is purportedly seen folding his hands while a villager informs the crowd that “humne maafi manga li hai (We have convinced the BJP leaders for an apology)”.

However, Grover later said that he did not apologise, and merely said “Ram-Ram” to greet the people there. He also said that he will go to the temple again for religious purposes if needed.

Later, the Rohtak administration issued a statement, saying, “A dispute which had arisen due to a misunderstanding has been resolved peacefully… it was not an issue in which an apology was required, rather it was a misunderstanding.”