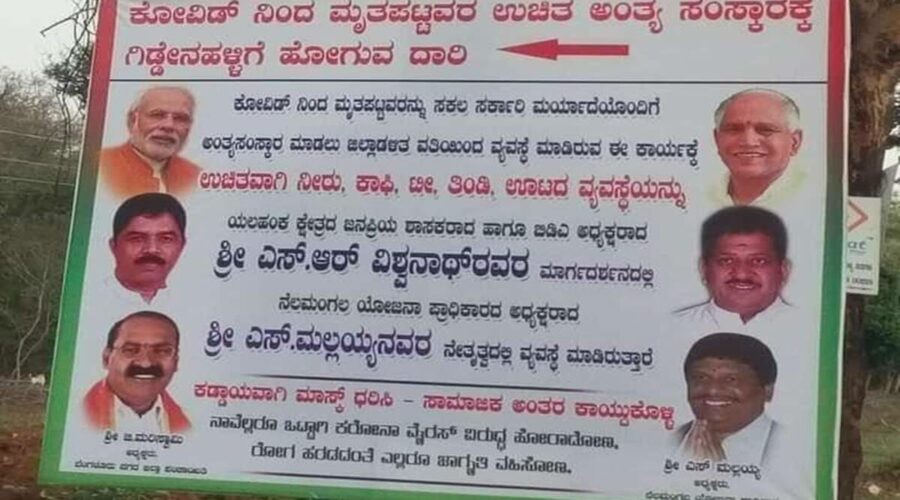 The hoarding claimed that free food and refreshments were arranged for people attending funerals at the Giddenahalli crematorium "under the guidance of Yelahanka MLA S R Vishwanath." A banner displayed on behalf of a local BJP leader near a crematorium in Bengaluru where Covid-19 victims were taken for their final rites drew criticism after a photograph of the same went viral.

The hoarding claimed that free food and refreshments were arranged for people attending funerals at the Giddenahalli crematorium “under the guidance of Yelahanka MLA S R Vishwanath.” The flex board also featured mugshots of Prime Minister Narendra Modi, Chief Minister B S Yediyurappa, and Revenue Minister R Ashoka apart from Vishwanath and a couple of local leaders.

A few locals in the area garlanded the board with chappals and other footwear in protest of the action.

However, Vishwanath, who is also the Chairman of Bengaluru Development Authority and is a former political secretary to the CM was fast to react by removing the board from the place it was erected.

Later, he also released a video statement apologising for the incident explaining that he was not aware of the banner being displayed. “I had asked officials to provide drinking water and other facilities to people coming to the crematorium as it was located in a remote area. Someone who I am not aware of has displayed the banner by mistake. Using photos of the PM, CM, myself and others are unpardonable,” he said.

The MLA added that the banner was removed soon based on his instructions to the local cadre. “At this time we should focus on serving people, and not seek publicity,” he urged.

Meanwhile, Bengaluru reported 115 more Covid-19 deaths on Monday as a total of 239 succumbed to the virus from across the state. Other districts which reported a high death toll, as per the health bulletin issued by the government were Chamarajanagar (19), Mysuru (14), Ballari, Hassan (13 each), Tumakuru (8), Shivamogga (7), Bagalkote, Chikkaballapura, and Kalaburagi (5 each). With this, the cumulative death toll in the state rose to 16,250 since March 10 last year.

At the same time, following two furnaces breaking down at Summanahalli crematorium in Bengaluru, officials decided to shut it down till May 10. “While each furnace in electric crematoriums can burn a maximum of five bodies a day, they have been used relentlessly without a break in the last month. Open cremation using firewood is the primary way out now while we fix such issues across crematoriums in the city, a senior member in the team of officers overseeing the functioning of electric crematoria in the city said.