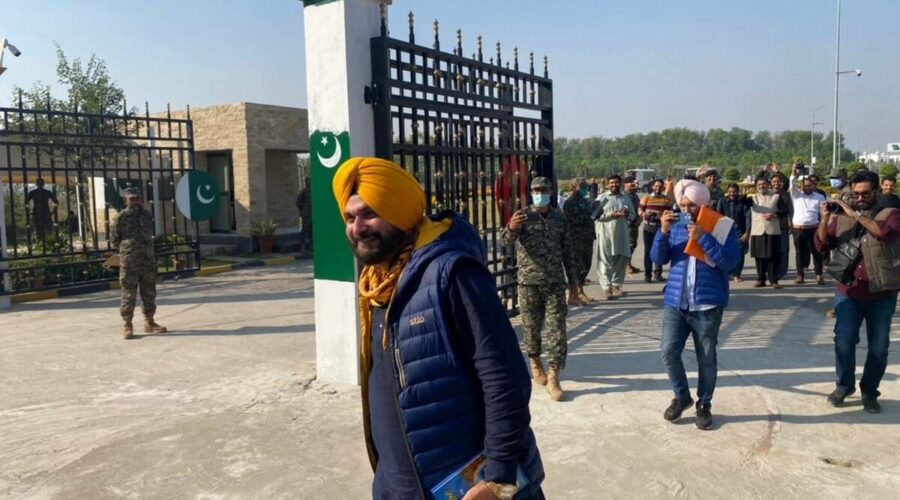 A representative of the Pakistan Punjab Governor greeted Navjot Singh Sidhu at the entrance to the Gurdwara complex in Kartarpur and conveyed the Governor’s compliments to which he responded warmly. Punjab Pradesh Congress Committee chief Navjot Singh Sidhu’s star status was on ample display on both sides of the India-Pakistan border during his visit to the Gurdwara Darbar Sahib via the Kartarpur corridor on Saturday.

Not only was Sidhu mobbed by Indian immigration and customs officials but also by on-duty BSF jawans as he went around greeting each one of them and obliging them with photographs and selfies.

This was repeated on the other side of the border, too, where Sidhu was deluged with requests from Pakistani immigration staff and police officials for selfies. The number of his fans, however, multiplied by several times when he entered the Gurdwara complex in Kartarpur.

Many Pakistani visitors suddenly realised that a celebrity had arrived and rushed towards Sidhu to greet him. He was followed around the complex by several such visitors, who were recording his every movement and word on their mobile phones. The crowd became unmanageable at one stage inside the Gurdwara sanctum sanctorum and the priest was forced to admonish the visitors who were clicking photographs of Sidhu and threatened to have them removed by security guards.

“Thoko taali, thoko taali,” shouted a group of youth, chanting Sidhu’s catchword in a comedy show. When asked if they knew who Sidhu was, Ish Kumar and Ritik, both from Sukkur in Sindh province, said that they knew he was a former cricketer who appeared in Kapil Sharma’s show.

Incidentally, a large gathering of Pakistani Hindus from Sindh visited the Gurdwara Darbar Sahib on Saturday in connection to the birth anniversary celebrations of Guru Nanak Dev. “We came in buses to Nankana Sahib and Kartarpur during Gurpurab. Today, we were pleasantly surprised to find Navjot Sidhu amid us. He was very down to earth and asked us to take as many photos with him as we liked,” Ranjit Kumar, a devotee from Sindh, said.

Ishfaq Hussein from Lahore requested Sidhu to help Pakistani pilgrims get permission to visit shrines like Nizamuddin Aulia in Delhi. “Sidhu sahib, you have raised the issue of Kartarpur corridor successfully. Please also raise our matters too. I have a deep desire to visit Nizamuddin Aulia’s dargah,” he said.

Overwhelmed by the affection he was getting from all quarters, Sidhu was seen profusely thanking everyone, including the Pakistani officials who were escorting him. A representative of the Pakistan Punjab Governor earlier greeted him at the entrance to the Gurdwara complex and conveyed the Governor’s compliments to which Sidhu responded warmly.

Another interesting scene was enacted away from the Sidhu entourage where some Pakistani Muslim youths were seen trying to understand the ethos of Sikhism from three Indian Sikh youths. Engaged in deep yet friendly debate, near the Khoo Sahib (holy well of Guru Nanak from which he took water), the Pakistani boys tried to get a grasp on what Sikhism entailed by asking questions.

However, there were stray persons who could not understand what was causing the commotion associated with Sidhu. “Koi Punjabi singer aaya hai? (Has a Punjabi singer come?),” asked Azmat from Lahore excitedly as he saw a crowd gathered around Sidhu. He did not know who Sidhu was.

11/20/2021 Cities Comments Off on Armed with mobile phones, Pakistani officers and commoners give Sidhu a warm welcome at Kartarpur
India