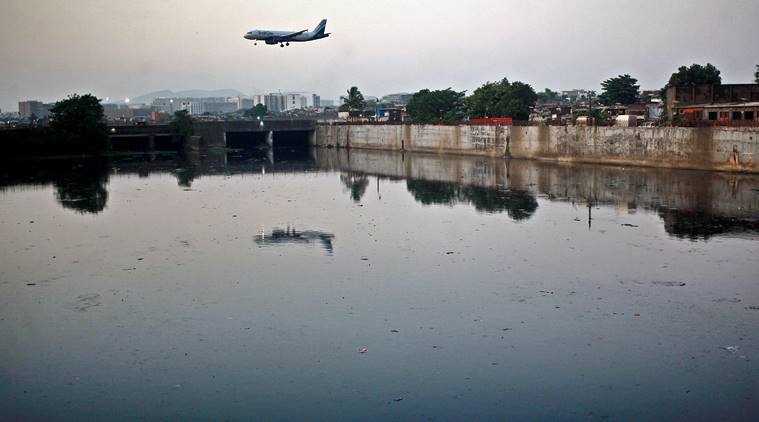 Mithi is anything but what its name suggests — sweet. Originating at Vihar lake, the Mithi is now covered with water hyacinth, garbage, plastic, sewage, traversing 17.8 km through slums, squatters, industrial and residential complexes of Powai, Saki Naka, Kurla and Vakola before ending at Mahim. FOR MORE than 10 years now, 45-year-old Sumitra Indal Chavan and her family of four have lived in Powai’s Jai Bhim Nagar slums, adjacent to the Mithi river.

Flooding during the monsoon is not a concern anymore. But what worries her the most, especially during the rainy season, is the health of her two grandchildren as the river has become a breeding ground for mosquitoes. “Garbage is accumulated in the river at all times. I fear it will lead to dengue, malaria, TB,” Chavan says.

Mithi is anything but what its name suggests — sweet. Originating at Vihar lake, the Mithi is now covered with water hyacinth, garbage, plastic, sewage, traversing 17.8 km through slums, squatters, industrial and residential complexes of Powai, Saki Naka, Kurla and Vakola before ending at Mahim.

The largest informal industry and housing settlement of Dharavi, with the highest number of recycling units in Asia, also stands on the fringes of the Mithi. In 2015, Environment Minister Ramdas Kadam had said the Mithi contained 93 per cent domestic waste and 7 per cent industrial waste. There are more than 1,500 industrial units along the river, most of them discharging their waste into the water body.

Pawan Pal, 28, who lives near Filter pada near Powai was brought up and has lived along the Mithi, has become a crusader and an activist fighting to keep the river clean. Pal says, “Garbage and waste is not being collected from the area by the civic body. I have raised my voice against health concerns and the compromises that the residents have to make because of poor sanitation.”

According to the data from the Brihanmumbai Municipal Corporation (BMC), around 15 lakh people live along the river , either as squatters, in slums or residential and industrial complexes. Pal adds, “There’s no proper drainage and the waste from toilets goes into the river.”

After years of neglect, the 2005 floods brought the Mithi at the centre stage.

A report by a fact-finding committee on the floods had said the inadequate width of the river channel due to encroachment on both the banks had greatly aggravated the situation by constricting the flood flow and creating an upstream movement.

Susheela Shukla, who has been living along the Mithi since 1992 near Filter pada, was one of those whose homes was destroyed. But she has since rebuilt it and continues to live there. She agrees that the Mithi has become a sanitation problem but she does not want to be relocated.

“First, I was eligible for a house under the rehabilitation scheme but now a local contractor and BMC officials said my details and names were not mentioned in a survey conducted by them in 2000. We have got a stay order and don’t wish to be relocated,” she adds.

05/26/2019 Cities Comments Off on ‘Anything but mithi’, say local residents
India