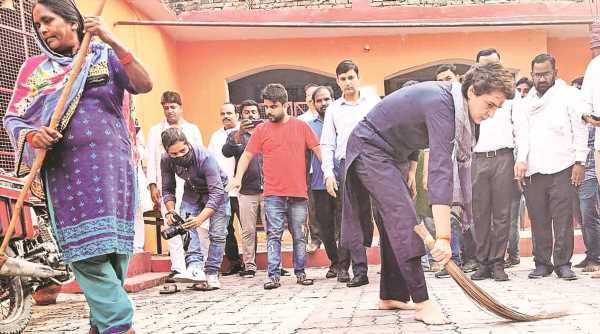 The Chief Minister, in a TV interview, said Friday that the public has left her worthy of only cleaning floors. Priyanka then reached a Valmiki temple in a Dalit colony here and cleaned its premises with a broom. 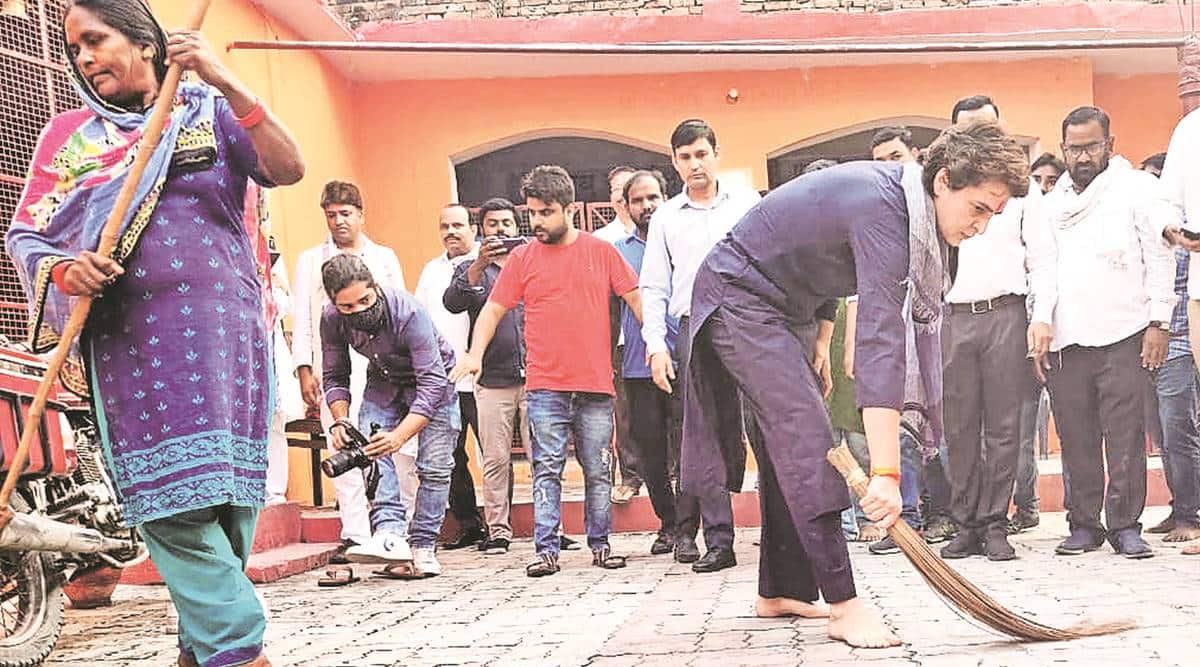 UTTAR PRADESH Chief Minister Yogi Adityanath and AICC general secretary Priyanka Gandhi Vadra on Friday exchanged barbs over the latter’s act of sweeping the guest house in Sitapur where she was detained .

The Chief Minister, in a TV interview, said Friday that the public has left her worthy of only cleaning floors. Priyanka then reached a Valmiki temple in a Dalit colony here and cleaned its premises with a broom.

She said Adityanath’s remark was not against her but crores of women, Dalits and safai karamcharis, who proudly keep the houses and cities clean.

Earlier in the day, when asked about Priyanka sweeping the guesthouse floor with a broom after her detention, Adityanath told News 18 India channel: “The people wanted to make them [Congress leaders] worth doing that and that is what they have made them do. These people have no other work except creating nuisance and spreading negativity.”

Priyanka said the CM has humiliated those engaged in cleaning and sanitation work. She told people in Luv Kush Nagar: “He has not humiliated me by saying so, he has humiliated you all as crores of Dalit brothers and sisters are safai karamcharis and they do this work.”

That is the reason, Priyanka said, she decided to personally clean the Valmiki temple to show that there is nothing wrong in doing the work. She asked the Chief Minister to change his mindset.

Reacting to a statement made by the Union minister that his son was not present at Lakhimpur Kheri, Priyanka said it was the Prime Minister’s moral responsibility to remove the minister till investigation is going on. She said the Chief Minister as well as Prime Minister were silent on the issue so there is a need for leaders like her to stand with the victims.

On the police summons to Ashish, she said, “Have you ever seen that a person tramples people under his vehicle and the police are giving invitation to come… Why has he not been arrested?”

The Congress, meanwhile, has named its October 10 Varanasi rally “kisan nyay rally”, where it will demand the removal of Ajay Mishra as Union minister, the arrest of the accused, and the withdrawal of the farm laws. The rally is seen as the launch of the party’s 2022 UP election campaign. It will be addressed by Priyanka.