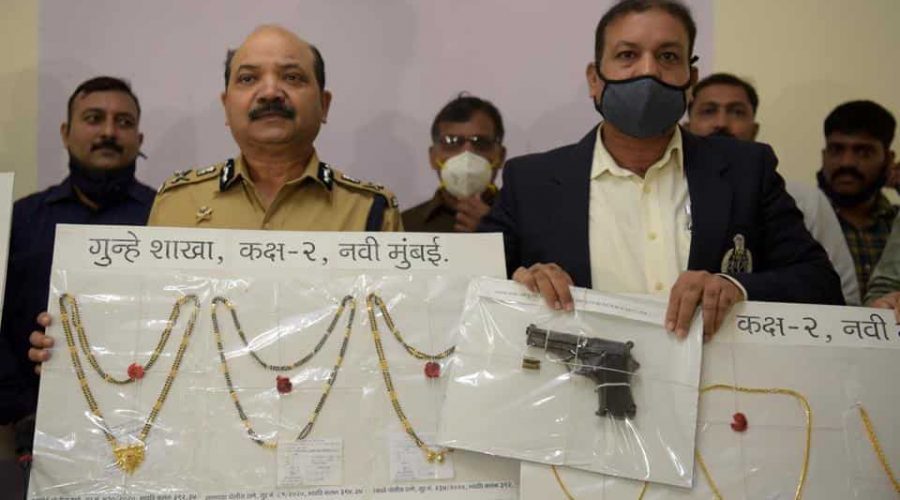 The Navi Mumbai crime branch arrested five persons from a chain-snatching gang, solving at least 20 cases in the city. The gang had started robbing women of gold chains shortly after the lockdown. They operated in a group of four men riding two motorbikes.

The police have recovered valuables worth ₹20 lakh from their possession. Two of the prime accused were arrested from the Odisha-Jharkhand border early this week, police said.

The men especially targeted elderly women in isolated locations, pillion riders on the bike would rob their victims. The other biker would follow the first bike to prevent them from getting caught in case the victims chased the robbers, police added.

The gang managed to evade police for almost the entire year. Prior to resorting to chain snatchings, some of the accused were arrested for pickpocketing train commuters.

“While investigating the recent chain snatching cases, we started tracing the bikes that the men used in the crimes. With the help of informants, we learnt that the prime accused was headed to Kolkata by train and with the help of Odisha and Jharkhand police, the accused was nabbed in time,” said Giridhar Gore, senior inspector, unit 2, crime branch.

After it was confirmed that the prime accused, Tanvir Shaikh alias Dipak, 22, was on board a train with his accomplice, the Navi Mumbai crime branch coordinated with the railway police and authorities to track the train route. With a coordinated attempt at various railway stations, Shaikh and his accomplice were nabbed at Rourkela station.

They were brought to Navi Mumbai on a transit remand and later placed under arrest following which the other accused were identified. Shaikh worked with Akil Khan, 25, a taxi driver, Harun Sayyed, 23, an auto rickshaw driver, Tasharruf Shaikh, 22, and a fourth wanted accused.

The fourth suspect is the husband of Shabnam Shaikh, 25, who is a hawker in Panvel. After robbing their victims, the accused men would hand over the stolen jewellery to Shabnam. She would sell it to different jewellers.

Since January, 45 chain snatchings have been reported in Navi Mumbai, out of which only 13 were solved until the gang’s arrest. Of the remaining 32 unsolved cases, 20 chain snatching robberies were found to have been committed by Shaikh’s gang.

Police recovered ₹20 lakh worth gold valuables along with two motorbikes from their possession.