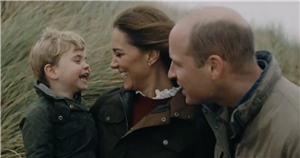 As they celebrate ten years of wedding bliss, Prince William and Kate Middleton have shared a gorgeous new video with their children.

The couple, who previously laughed hysterically as they played golf, gave an insight into their family life with the adorable clip.

In the video, the pair are joined by children George, seven, Charlotte, five, and three year old Louis.

The family-of-five can be seen climbing a cliff and playing chase together, as well as roasting marshmallows on an open fire.

William, 38, and Kate, 39, look as happy as ever as they enjoy time with their children in the heartwarming video.

Alongside the video shared on their social media channels, the couple wrote: “Thank you to everyone for the kind messages on our wedding anniversary.

"We are enormously grateful for the 10 years of support we have received in our lives as a family. W & C.”

The Duke and Duchess of Cambridge shared two new photographs ahead of their wedding anniversary.

The snaps, taken by photographer Chris Floyd, showed the Duke of Cambridge dressed in a blue shirt with a navy jumper on top alongside a pair of dark trousers, while his wife donned a stunning blue floral chiffon dress for the occasion.

While Royal fans up and down the country were left in awe of the intimate pictures, many missed a small detail that explains how they look so relaxed on the grounds of Kensington Palace.

Prince William's silver watch showed that the pictures was taken at 11:39am, while the couple's three children were away at school, allowing them to be a little more laid back and comfortable than their usual state of alert.