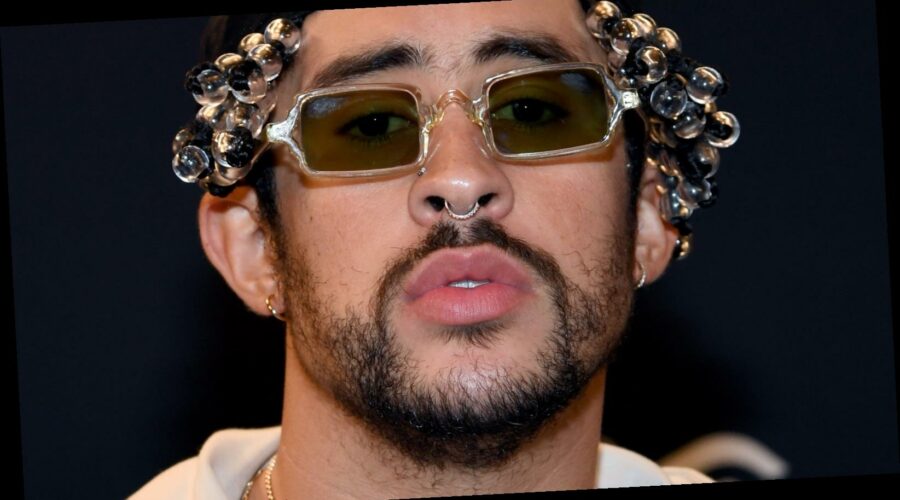 Even for those who are not so interested in Latin urban music, Bad Bunny (or Benito Antonio Martínez Ocasio) and his music have been hard to miss in the past few years. Just within the past three years, the Puerto Rican rapper, singer, and songwriter has collaborated with musical giants like J Balvin, Daddy Yankee, Cardi B, Drake, and Rosalía, just to name a few (via The Oprah Magazine). Some may even recognize him as Shakira and Jennifer Lopez’s guest on the Super Bowl LIV halftime show back in the early part of 2020 (per CBS News). Bad Bunny has also been busy breaking barriers, becoming the first Latin urban artist on the cover of Rolling Stone magazine in May of 2020 (via NBC News).

Accomplishments aside, Bad Bunny is also a style icon of sorts, and has become known for his eclectic fashion sense and social media persona. So, ahead of his Feb. 20 performance on Saturday Night Live, we have uncovered a bit more about the Latin urban music star and how his chart-topping dominance is not all that defines him.

Though he could go by his full name, Benito Antonio Martínez Ocasio, the rapper, similar to many other entertainers who have shed their names for catchier monikers (don’t even get us started on Hoobastank), decided to stick with a childhood nickname that previously annoyed him. Though he admits that he was a class clown, he was not feeling particularly funny in a white bunny costume on an Easter holiday at age six, per E!. “Bad Bunny, that name comes from a picture when I was a kid,” the rapper told the outlet. “I think that I was six years old. I was so mad. That was Easter day in the school and the teacher picked me to dress up.”

Despite the fact that it was a name created to tease him, the rapper is now proudly sporting the name that has come to represent the empire that he has created in the years since he was forced to wear a bunny costume in his youth.

Given his appearances on WWE and lyrical nods to famous wrestlers in songs like “I Like It,” with J Balvin and Cardi B, in which he pays tribute to Eddie Guerrero, a popular Mexican American wrestler, it is clear to see that Bad Bunny is quite a big fan of the world of wrestling (per NBC News).

Back in January of 2021, Bad Bunny performed his song “BOOKER T,” about the WWE star Booker T, during the WWE’s Royal Rumble…alongside the wrestling star. Bad Bunny also managed to realize a wrestling dream or two after landing Latino wrestler Eddie Guerrero’s move called the “frog splash” to take down two wrestlers just outside of the ring (per NBC News).

Then, on Feb. 15, Bad Bunny appeared on WWE’s Monday Night Raw (season 29, episode 18) and came home with the WWE 24/7 Championship belt with the help of WWE star Damian Priest (via Rolling Stone).

He has become a queer icon and trans ally

Similar to many people of his generation, Bad Bunny is not into labels. Translation: The rapper is open to all possibilities as they concern his sexuality. Given his flamboyant image and use of same-sex couples and transgender women in his music videos, many were beginning to wonder about the rapper’s sexual orientation. His answer: Who cares? “It does not define me,” he told the Los Angeles Times in February of 2020. “At the end of the day, I don’t know if in 20 years I will like a man. One never knows in life. But at the moment I am heterosexual and I like women.”

Along with becoming a queer icon of sorts, Bad Bunny has also been vocal in his support for the trans community. During a performance on The Tonight Show with Jimmy Fallon in 2020, the rapper protested the death of a trans woman, Neulisa Luciano Ruiz, also known as Alexa, who was killed in Puerto Rico in an alleged hate crime. While performing his song “Ignorantes,” Bad Bunny wore a shirt that said, “They killed Alexa, not a man in a skirt,” in Spanish,” (per NME).

Bad Bunny is known for being vocal about the rights of trans people in his native Puerto Rico and beyond.

The rapper is obsessed with a great manicure

As you can tell by now, Bad Bunny is not a fan of machismo or gender norms. For those who have been following the rapper’s style, it is quite hard to miss his love of bright and colorful nail designs. From holographic to over-the-top baubles, Bad Bunny has tried his hand (and I suppose, his manicurist’s hand) at nearly every nail design in the book (via Refinery29).

Not everyone is as open-minded as the rapper when it comes to nail design for men, though. Back in 2018, Bad Bunny took his rage to Twitter after being denied service in a nail salon in Spain because of his gender. “I just wanted to tell you all that I went to this sh**ty place to get my nails done (manicure + color), and they told me NO because I’m a MAN,” he said in a since-deleted tweet. “I don’t know what to think, but it’s very unfortunate,” (per Remezcla).

According to the rapper, the urge to paint and decorate his nails just came to him one day before an awards show. “It was something that happened very randomly. I was in Miami for an award show, I saw a nail polish, and I got the urge to paint my nails,” he told Refinery29. “It wasn’t something that I planned.” (With that being said, please do us a favor and check out his statement nails on his Instagram account now — you might get the sudden urge to grab your nail polish).

He inspired a political protest in Puerto Rico

In the aftermath of hurricanes Irma and Maria in 2017 and countless allegations of corruption, manipulation of media outlets, homophobia, and generally bigoted behavior against former governor Ricardo Antonio Rosselló, the “Ricky Renuncia” was born, and, in part, it was inspired by Bad Bunny and his music. The Ricky Renuncia movement hit the streets in the summer of 2019 with the goal of ousting Rosselló to bring peace and prosperity to Puerto Rico once again (per Forbes).

In July of 2019, Bad Bunny released “Afilando los Cuchillos” (which translates to “Sharpening the Knives”) with Residente and iLe that speaks about the corruption and strength of the Puerto Rican people. Upon its release, the song became an anthem for the protests. Along with fellow famous Puerto Ricans like Ricky Martin, Bad Bunny was successful in bringing the world’s attention to the protests as he marched arm-in-arm with his fellow Puerto Ricans (via NPR).