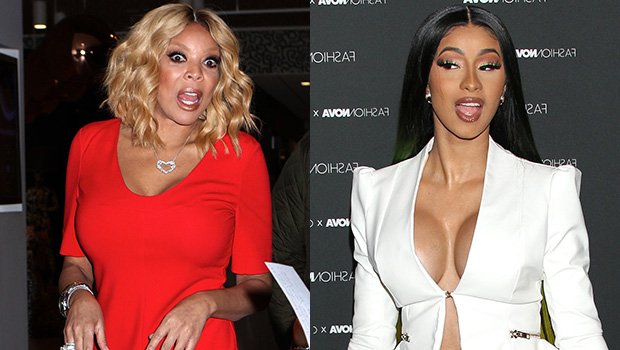 Who knew that post-op plastic surgery experiences would bring Wendy Williams and Cardi B so close. The talk show host discussed Cardi’s recent issues with her recent breast augmentation and liposuction, and admitted that she can relate!

Wendy Williams, 54, and Cardi B, 26, have so much in common. — They both always tell it like it is, and, they’ve apparently had similar post-plastic surgery experiences. While discussing Cardi’s recent concert postponement, due to her difficult recovery from plastic surgery, Wendy revealed that she too had a hard time bouncing back from her own procedure. The host has previously admitted to getting a breast augmentation in 1994. However, she did not specify which surgery of Cardi’s she can relate to — breast or liposuction.

Wendy then recalled the time when Cardi first revealed that she underwent plastic surgery — during her performance at the Beale Street Music Festival in Memphis on May 5. Cardi fans will know that the rapper had to slow down her dance moves at the show because of her recent plastic surgeries. “She said it on stage, so she probably felt something open up or maybe she saw oozing puss,” Wendy said on her show, May 22. “As a girl who’s been there and done that, I can tell you, if you jump around enough, you’re going to see oozing puss,” Wendy admitted, before her studio audience oohed with concern. “No! I didn’t jump around,” she said, explaining, “I don’t have a jump-around profession if you can’t tell. I walk and talk softly and I sit down… All I needed was a catheter,” Wendy joked.

Cardi B fans became concerned about the rapper’s health on May 21 when it was announced that she canceled (and postponed) her upcoming concert at 92Q Spring Bling Festival, which was scheduled for Friday, May 24 in Baltimore, Maryland — an appearance she was set to headline.

The “Wish Wish” rapper didn’t shy away from her reasoning as to why she had to postpone the show. Her rep confirmed to HollywoodLife on Tuesday that Cardi has been piling on her workload and did not take the proper time to recover from her surgeries. And, Wendy applauded her for being truthful about something other stars have shied away from in the past.

“First of all, give her points for admitting something true, as opposed to — she could have said anything, like, ‘My daughter doesn’t feel well,’ or, ‘I don’t feel like coming,’ or ‘I got more money in Dubai, so I’m going there,’ or, ‘I got the flu,’” Wendy said. “Like our girl has always done, she told us the truth. She had liposuction and a boob job, and apparently there’s complications. Nothing that will be permanent,” she added.

The full statement from Cardi B’s rep to HollywoodLife explained: “Cardi was overzealous in getting back to work. She didn’t take the necessary time to fully recover. Her strenuous schedule has taken a toll on her body and she has been given strict doctor orders to pull out of the rest of her performances in May. She’s very disappointed as she hates to let her fans down. She reassures them that she will see them in September.”

05/22/2019 Celebrity Comments Off on Wendy Williams Admits She Can Relate To Cardi B’s Post-Plastic Surgery Issues: I Would Know
India