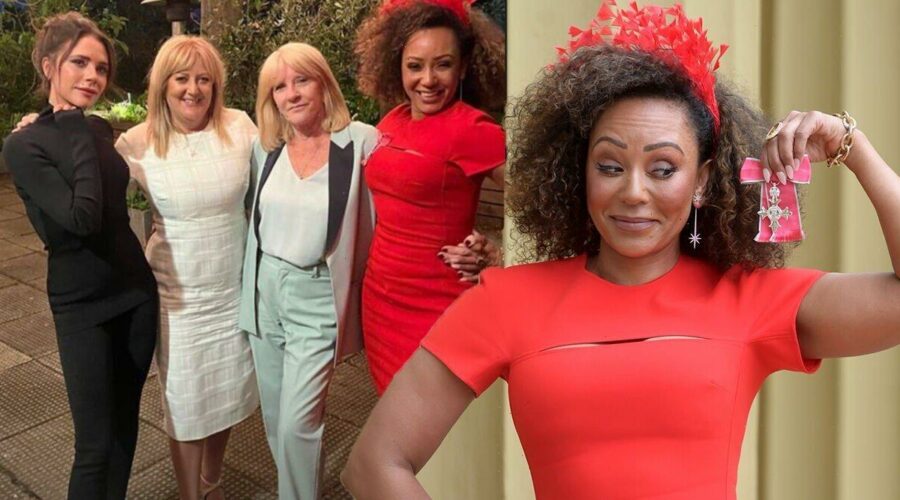 Mel B discusses her experience of domestic violence

Victoria Beckham has revealed the role she had in Spice Girl Mel B being awarded an MBE yesterday. The singer looked radiant in red as she received her royal honours at Buckingham Palace on Wednesday and her outfit bore a subtle tribute to her former pop career. The 46-year-old songstress was appointed an MBE by Prince William for her services to charitable causes and vulnerable women.

Looking smart and sophisticated, Mel B rocked a stunning red dress designed by her bandmate and close friend, Victoria Beckham, who had the sweetest reaction to her friend’s exciting achievement.

Victoria took to Instagram to share a heartfelt message in view of her 29 million followers, which she dedicated to Mel B. “I’m so proud of @officialmelb receiving her well deserved MBE,” she wrote.

“A true role model, it was such an honour to dress you and your mum.”

However, Mel confessed she didn’t wear knickers under the stunning outfit as she received royal honours in the first major investiture at Buckingham Palace since the start of the pandemic.

While receiving the honour, cheeky Mel quipped that she was “stark, b****ck naked” underneath her figure-hugging outfit.

Speaking to The Sun, she said: “Victoria asked me, ‘Will you wear nipple covers?’ I said, ‘Why bother?'”.

The singer also revealed that Prince William had begged her for a Spice Girls reunion.

She said: “And he asked, ‘Will you get the Spice Girls back together?’.

“I told him I was having dinner with Victoria that evening and he said, ‘Oh good, I’ll work on David then’. “

Mel added that she and Prince William had chatted about her work on domestic violence, with her calling it a “very special moment for me”.

DONT MISS:
Sally Nugent reacts as she and Dan Walker are compared to feuding kids (PHOTOS)
Madonna, 63, looks ageless in busty pic before cosying up to Maluma (NEWS)
Charley Webb ‘furious’ with husband Matthew Wolfenden for defying her (LATEST)

Mel could not keep the smile from her face as proudly as she received the reputable accolade from the Duke Of Cambridge, after presenting him with her best curtesy.

The Woman’s Aid patron dedicated her MBE to other people who suffered in abusive relationships.

Speaking to the aforementioned publication about learning she had received the honour, she said: “I thought about all the women I’ve met over the past few years who have been through terrible situations, women who have died, women who are still suffering.

She continued: “Receiving that letter telling me about the MBE… it was the first time I thought that I’d done something.

“Not as a Spice Girl, but as Melanie Brown – this working-class, mixed-race kid from Leeds who has always done her own thing, regardless.

“That made me feel incredibly proud of myself, of all women who’ve been through similar experiences and of all the people who have helped me along this path,” she added.

Melanie split from her film producer ex-husband Stephen Belafonte in 2017 after a decade together.