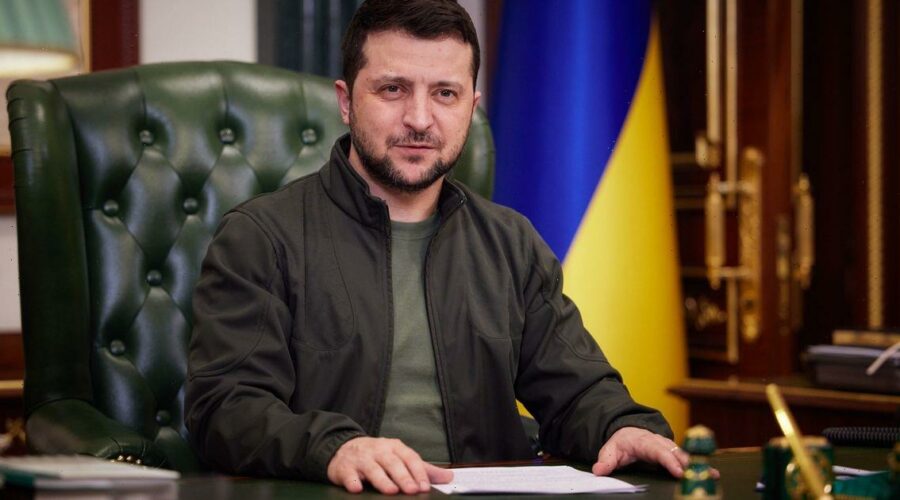 President Volodymyr Zelensky has said Ukraine will host the next Eurovision Song Contest after the country's folk-rap group Kalush Orchestra won the 2022 trophy.

Kalush Orchestra were destined for victory amid Russian President Vladimir Putin's invasion, which sparked Eurovision organisers to ban Russia from competing this year.

Ukraine, which joined the contest in 2003, won by a landslide 631 points as votes from the public came in their droves to show their support for the country.

The win is the third time Ukraine have taken home the victory – after previously being crowned Eurovision champions in 2004 and 2016.

After Kalush Orchestra were announced as the winning act, President Zelensky vowed that Ukraine will host the next Eurovision Song Contest as per tradition.

“Next year Ukraine will host Eurovision!

“For the third time in its history. And I believe – not for the last time.”

Meanwhile, in an Instagram post he added: "We will do our best to one day host the participants and guests of Eurovision in Ukrainian Mariupol. Free, peaceful, rebuilt!"

President Zelensky then praised Kalush Orchestra for the win and thanked those who voted.

And as the folk-rap group received the trophy at the event, they said: "Thank you for supporting Ukraine. This victory is for every Ukrainian. Slava Ukraini."

The band's lead singer also made an emotional statement at the end of their performance as he said: "Stop the war. Help Mariupol. Save Azovstal!"

The result was the best the UK has seen since 1998.

Speaking to the BBC after the result, 32 year old Sam said: "This is the tip of an iceberg.

"The UK is going to be a force next year. It's gonna be mad."

And Graham Norton, who presented the contest said: "This is a red letter moment.

"I am so happy for [Sam], for the UK and for the BBC who have worked so hard to turn our fortunes."

Ahead of the performance from Sam, host Graham Norton coined him a "star."

He shared with OK!: "Sam Ryder is a star. He has been getting a great response around Europe as he promotes Space Man."

Sam rose to fame as he posted videos showing off his incredible singing talent on TikTok throughout the UK lockdowns amid the Covid-19 pandemic.

In a nod to his humble beginnings, Sam posted a heartfelt tribute to his supporters on his Instagram page ahead of the Eurovision live show.

He wrote: "If you're seeing this, chances are you've been supporting for a long time! Maybe you watched and shares some of my lockdown singing videos from the corner of my shed (with the little green lamp).

"Your encouragement and kindness got me here."

For your latest showbiz news, sign up to OK!'s daily newsletter here