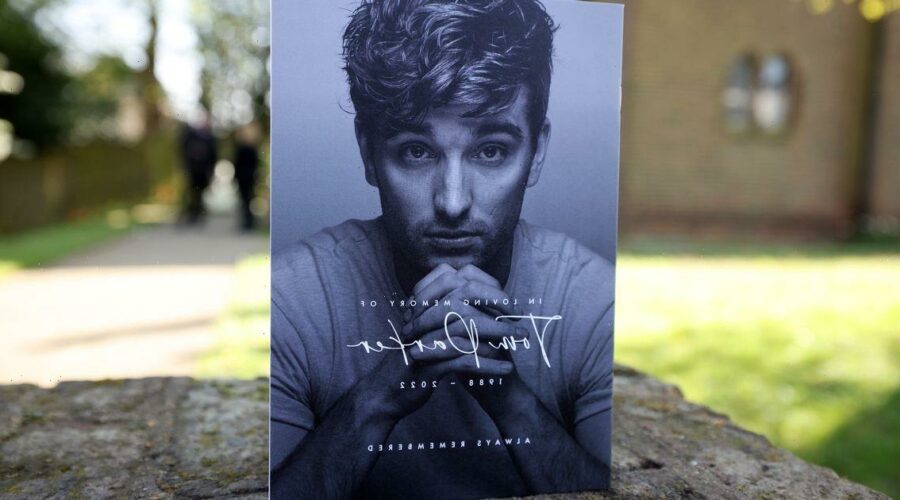 Tom Parker's funeral is taking place today, Wednesday 20 April, and in emotional scenes, The Wanted fans created a tree-lined procession through Petts Wood and around Queensway, South East London where the private service was held.

The star's wife Kelsey Hardwick previously revealed the service was taking place in Saint Francis of Assisi Parish Church, and fans could watch the funeral via streaming on a screen outside.

The mum-of-two also asked that flowers were not sent to the funeral service as the family had plans to arrange their own, and beautiful flora and fauna were revealed instead.

Kelsey looked incredibly brave as she was first spotted flanked by her parents either side holding her hands.

The mum-of-two wore sunglasses to cover her face but it was clear she was crying as she walked up the road behind her late husband.

The star opted to wear a black plunge jumpsuit and sparkly rust-coloured blazer, her curly blonde locks styled in a simple loose style.

As the hearse arrived to collect Tom's coffin, emotional scenes saw a stunning red and white floral heart carefully arranged on top of the vehicle, with his name on the front.

Another heartbreaking design saw the words "Glad You Came" – also one of the band's most famous songs – created in white flowers.

It was also decorated with stunning red roses on top. Instead of extra flowers, Kelsey requested donations to brain cancer research.

Horses and a carriage also made their journey to the church.

The Wanted band members were also at the procession and then became pallbearers to carry the coffin onto a double decker bus.

The Order of Service then revealed a selection of bittersweet personalised tributes to the beloved star.

The church's entrance music was the iconic Champagne Supernova by Oasis, a band very close to Tom's heart. The priest then gave a welcome and opening prayer.

Hymns such as You Raise Me Up were also sang by the congregation, in a wonderful celebration of the star's life and passions.

As the service concluded, a bible reading was set to be read by Tom's cousin Jonathan Wright.

And in a truly beautiful touch, the service's parting music was a particular track by The Wanted – Gold Forever, which Tom truly will be.

Ahead of the service, the grieving widow posted a message on her Instagram page showing the details for her followers.

“Thomas Anthony Parker. There will be a private celebration of life on Wednesday 20th April," she said.

"We know many of you would like to pay your respects as well, so would love for you to join us in Petts Wood from 10am. It would be beautiful to have everyone line the route as we head to our private service.

"You are then welcome to join us outside the church for the duration where the service will be relayed on screens."

There was already rows of fans eager to pay their respects to the late star at 10am outside the church, as many of them dressed in black and arrived with friends and fellow fans ready to watch the service.

Sound and visual equipment ready for the stream were also set up and lining the pavements.

Dad-of-two Tom sadly died on March 30 at the age of 33, after suffering from a brain tumour.

The star was diagnosed with glioblastoma in October 2020, and was told at the time that the cancer was already in stage four and the tumour was inoperable.

Having been given a maximum of 12-18 months to live, the beloved star fought all he could to beat the cancer and get more time with his wife and two children Aurelia, two, and Bodhi, one, right up until the very end.

In between undergoing experimental treatment in Spain for the disease, Tom was also taking part in his band's reunion tour.

Despite the most almighty efforts, Kelsey announced Tom passed away at home with his family by his side.

As well as kindly letting fans in to the plans, the social media star also thanked them for all their support and encouragement during the incredibly difficult and trying last few weeks since her husband's death.

She said it had been the "most difficult time", but she was grateful for all the messages.

For more updates, sign up to our daily newsletter here.