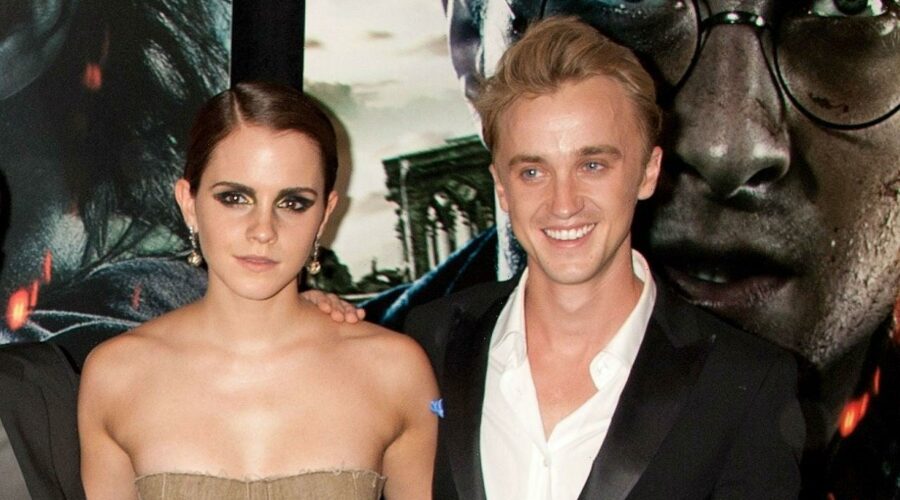 Ever since they were kids and Emma Watsonadmitted to having a big crush on her Harry Potter co-star, Tom Felton, the romance rumors between the two have swirled. The co-stars have stayed close over the years, only adding fuel to the fire. So when ET’s Ash Crossan got the chance to speak with Felton, 33, ahead of Warner Bros. launch of the first-ever Harry Potter flagship store in New York City, she had to ask if there was anything to the rumors.

“We are something, if that makes any sense. We’ve been very close for a long time. I adore her,” Felton gushed of 31-year-old Watson. “I think she’s fantastic. Hopefully she returns the compliment.”

So does that mean that there’s something romantic between the childhood friends?

“As far as the romantic side of it, I think that’s a Slytherin/Gryffindor thing rather than a Tom and Emma thing,” he admitted. “I absolutely think the world of her. I think to be a part of what we’ve all been a part of, but for her to be the only girl, certainly the youngest one on set, to grow up with what she had to grow up with was incredibly exciting. You’re going to get me teary now, but no, I think she’s a fantastic influence on the world.”

Felton, who played the villainous Draco Malfoy in the film adaptations to Watson’s book smart Hermione Granger, said that he regularly keeps in touch with the cast, Watson included.

“I spoke to Emma a couple days ago and immediately it was conversations about, ‘Oh wow, the kitchen sink’s been plugged’ or some trivial nonsense like my dog wouldn’t eat a particular kind of food,” he said.

Of the rest of the cast, including Daniel Radcliffe (Harry Potter) and Rupert Grint (Ron Weasley), he shared, “We do stay in touch, quite frequently… It is nice that we’re in sort of four different corners of the earth and yet when we catch up, it feels like yesterday that this was all going on.”

Felton noted that 20 years from the premiere of the first film, Harry Potter and the Sorcerer’s Stone, he still feels very tied to the Potterverse.

“It’s the fandom, I think, that’s kept me there. They’ve sort of become my family in a weird, twisted way,” he shared. “I know I can speak for [the cast] when I say we’re all very proud of what we did and we’re all very excited about these new ventures.”

Some of these new ventures include the new Harry Potter flagship stop in New York City, which opens Thursday. But could this possibly mean a Harry Potter television series, as has been previously rumored?

“I doubt it highly, but listen, the Harry Potter flame is not going to burn out anytime soon. It wouldn’t surprise me,” Felton shared.

And when asked if he’d return to his iconic role as the Slytherin everyone loved to hate, he replied, “As and when I’m given the chance, the hair will go back to blonde, but until then, I’ll just celebrate what we’ve done so far.”