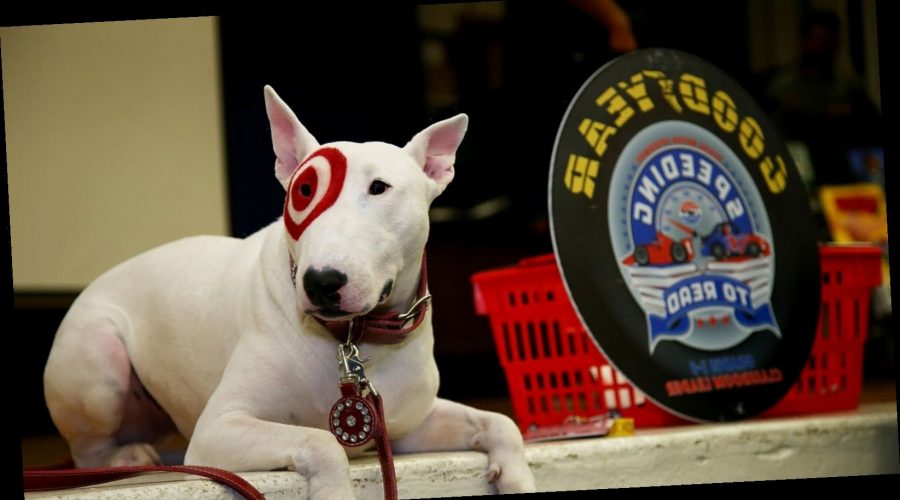 Who isn’t a fan of Target? Countless articles have been written about customers’ love affairs with the big box retailer and its brilliant marketing tactics. The appealing red, the convenient and brightly (but not harshly) lit layout, the festive seasonal decor, the tempting $1 display area, and the undeniably friendly customer service all conspire to create a shopping experience many not only don’t mind, but lust after. And among these marketing tactics is the unmistakable and perpetually recognizable Target mascot: Bullseye, the dog.

Bullseye, cleverly named after his breed, a white bull terrier, has been the face of the store since 1999 (via Target.com). Since that time, he has graced advertisements, banners, and store displays; he has greeted fans at store openings, and he is even featured prominently on the store’s gift cards. But where did this iconic little guy come from, and what’s his story?

Bullseye is a veritable star in his own right

Bullseye made his debut in Target’s 1999 advertising campaign “Sign of the Times,” which featured the pup set to a reworked version of the 1960s Petula Clark pop song. It was such a hit that the store’s marketing team worked the dog into other marketing endeavors, and he has been a staple of the brand ever since. He was so popular, especially with children, that the first-ever Bullseye plush toy was released in 1999, and there have been countless versions released since — one of the originals even resides in the Smithsonian Museum of Natural History.

With regard to the dog himself, you may be surprised to learn that it is actually “herself.” Every version of Bullseye has been portrayed by a female dog (The Globe and Mail). And with regard to Bullseye’s signature marking, the company’s bullseye logo painted over his left eye, it is created with non-toxic Humane Society-approved vegetable-based paint that is applied by a professional makeup artist before photo shoots and appearances. And when Bullseye travels, she sits in his own seat on the airplane — no pesky crates for this pampered pooch!

So how does one dog handle so much fame? Well actually, there are a total of six dogs who are trained to play Bullseye so that he never misses an appearance or event, and Target says two more lucky pups are currently in training to become Bullseye numbers seven and eight!