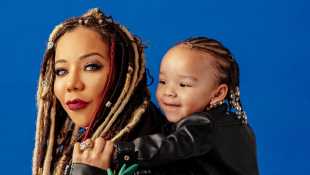 T.I., along with his many fans, were impressed with Heiress’ memory of Nipsey Hussle’s car color. The sweet video also served as a tribute to the slain rapper nearly two months after his death.

Nipsey Hussle’s legacy is still being remembered, as even Heiress Hussle, 3, still recalls his favorite color. In a video that Heiress’ dad T.I., 38, reposted to his Instagram on May 20, the toddler is asked what color was the Grammy-nominated rapper’s car. She breathes a long sigh before adorably replying, “Nipsey’s blue.” And that’s correct — “Nipsey blue” is the color that has been used to commemorate the Victory Lap rapper after he was shot to death outside his store for The Marathon Clothing in Los Angeles on March 31, 2019.

You can spy “Nipsey blue” cars in Offset and The Game’s driveways, as both rappers repainted their luxury vehicles in honor of Nipsey’s death. NBA star LeBron James even requested Crayola to name one of its crayons “Nipsey Blue” on April 25, an idea that many other fans echoed after resurfacing the crayon company’s call for name suggestions in a tweet from May 2017.

Given the important context behind “Nipsey blue,” T.I. was ecstatic that his three-year-old daughter could remember the color. “My baby…So Solid,So early….& Already Rollin’….✌🏽👍🏽TMC🏁🏁🏁🏁🏁,” he wrote on Instagram alongside the video of Heiress. T.I.’s close friendship with Nipsey gave him even more reason to be a proud dad! T.I. paid tribute to his fallen friend in an Instagram post on April 11, and even dedicated an award to Nipsey, which he received at Atlanta Film Society’s 2019 Image Film Awards Gala.

Blue really was Nipsey’s color. He rocked that shade head-to-toe in his music video for “Higher” alongside DJ Khaled and John Legend, which was filmed just three days before Nipsey’s death.