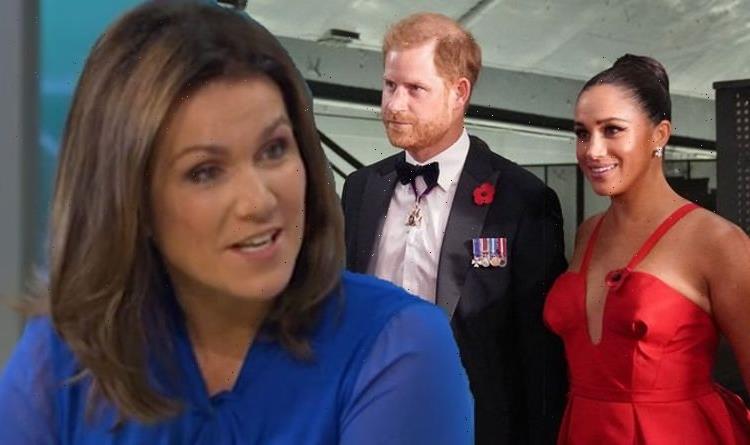 Susanna Reid has shared her thoughts on the news Meghan Markle will be appearing on the Ellen Show later today. The Good Morning Britain presenter discussed the news with her co-stars as she admitted it was “increasingly hard to defend” amid their desire for privacy.

It was announced yesterday that Meghan would be interviewed by chat show host Ellen DeGeneres.

People will remember how she sat down with Prince Harry as they discussed their departure from senior working members of the Royal Family.

The news of the latest interview was discussed on GMB this morning as Susanna shared her thoughts.

This came as her co-star Charlotte Hawkins read out a message from a viewer named Megan saying: “I’m sorry but didn’t Meghan and Harry say they didn’t want to be in the public eye.

“But yet again, another interview by Meghan. If you don’t want the spotlight, here’s an idea, don’t do interviews.”

Replying, Susanna said: “It sounds so simple but, look their explanation…

“I don’t know, I find that it’s getting increasingly hard to defend.

“But their explanation is they didn’t want the kind of media coverage, the kind of endlessly critical media coverage that they were getting and with the undertones that Prince Harry and Meghan said there was around it.

“That they wanted to almost take back control, didn’t they?”

Susanna then accidentally spilled a glass of water after moving some papers aside.

She continued: “I have just spilled an entire glass of water in my attempt to defend Meghan and her endless interviews as she argues for privacy.”

Ahead of the show airing, Ellen has shared a synopsis of what she and Meghan will be discussing.

This reads: “The activist and co-founder of Archewell will chat with Ellen about growing up and returning to California, as well as her New York Times bestselling children’s book The Bench.”

So far a few clips have been released of Ellen’s chat with Meghan.

In one of these, she explains how she used to drive to the Warner Brothers lot where they were now sitting as an actress.

She admitted how her life now was “very different” from when she used to travel for auditions.

She said: “I would park on gate three and I would scoot on over and the security guards here would always say ‘break a leg, I hope you get it’. So driving today was very different.”

Elsewhere in the chat, Meghan is expected to speak about her young daughter Lilibet who is currently teething.