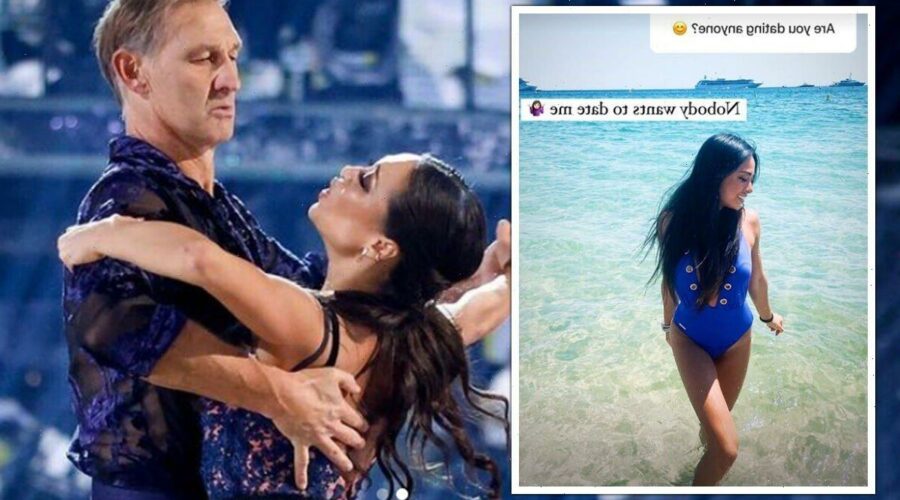 Strictly: Katya Jones on rumours of difficulties over Ukraine

Strictly Come Dancing professional Katya Jones opened up on Instagram when a fan asked about her relationship status. The star, who is competing in the BBC show with Tony Adams this year, bemoaned that no one wants to date her, when, suddenly, her co-star Luba Mushtuk saved the day.

Yesterday evening, Katya created an interactive Q&A on her Instagram story, prompting fans: “Talk to me. Ask me. Tell me.”

While most of the questions focused on her time with Tony Adams on Strictly, or her plans for once the series wraps, one follower delved a bit deeper.

When asked by a fan if she was “dating anyone”, Katya posted a sun-kissed photo of herself in a swimming costume.

She solemnly replied: “No one wants to date me” with a shrugging emoji.

The dancer has been famously single since splitting from her Strictly co-star Neil Jones, 40.

Birmingham Live reported earlier this month that Katya has also signed up for a celebrity dating app.

The outlet also claimed Katya has similar bikini snaps on her dating profile, highlighting her incredible figure earned through decades of dancing.

Hours after her first post, Katya updated her audience following a sweet message she had received from another Strictly star.

She posted a screenshot of her conversation with Luba Mushtuk, 32, who adorably volunteered for the position.

Replying to Katya’s post, Luba exclaimed: “I do! I want to date you any time any day,” with a heart emoji.

Katya captioned the post with a joking response: “Luba Mushtuk I would date YOU! I guess we are sorted.”

The Russian dancer has been impressing viewers with her routines alongside former footballer Tony Adams on the 2022 series of Strictly.

Unfortunately, both Luba and Neil were snubbed of a celebrity partner this year, much to the disappointment of fans.

Luba joined the show two years after Katya and Neil did, but she has been a fan favourite ever since.

The Italian Dance Champion had been inundated with support when the news was announced, but reassured her fans on Instagram.

She shared: “Don’t worry, I will still do music acts, group numbers and It Takes Two, so you still see me!”

Fans were equally enraged that Neil would not have a celebrity partner, being snubbed over the opportunity again.

Although he originally joined the BBC series with then-wife Katya in 2016, he only received his first celebrity partner in 2019.

Neil’s dedicated fans became even more furious when it was revealed that newcomer Carlos Gu would dance with singer Molly Rainford, getting a celebrity in his first year with Strictly.