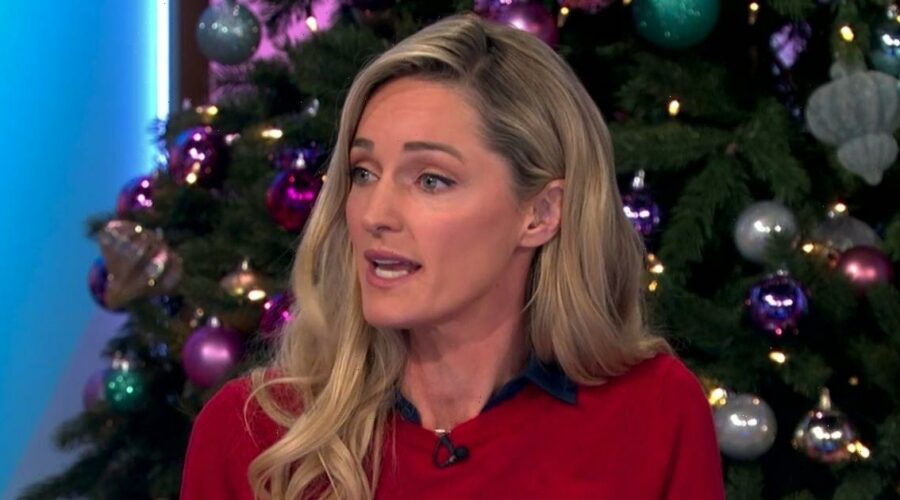 Storm Keating has opened up about the lasting injuries she’s sustained since being rushed to hospital with a devastating back injury that almost left her paralysed.

During her time as a guest panellist on ITV lunchtime show Loose Women, Storm, who is married to singer Ronan Keating, explained she needed urgent medical attention last year when a prolapsed disc turned into a much more serious condition.

Although she went on to recover from emergency back surgery, the mum-of-two admitted she’s still living with the painful symptoms today, noting she fears she may never get the feeling back in one of her legs.

Speaking to the rest of the panel, including anchor Christine Lampard, Storm, 40, explained: “I’m walking, obviously, I’ve got my legs, my bowel and my bladder, so that’s all good.”

“[But] my right leg is still probably fifty per cent numb and my foot. I might not get that back. I think that’s a very small price to pay considering what could have been.”

Further explaining how she found herself in the terrifying situation of experiencing temporary paralysis, Storm said: “I ended up in emergency back surgery. I prolapsed my disc and I just kept working through it and trying to push on through.”

“I had been warned, ‘look it’s escalating and you might need surgery. I obviously didn’t want surgery whatsoever so I tried everything with physiotherapy and then they did steroid injections.”

Although the injections initially helped keep the pain at bay, Storm explained that just five days later she was “flat on her back” and unable to walk, which left her family terrified.

Storm continued: “It escalated so bad that they finally got me into hospital. It was a bit of a panic for poor old Ro and the kids.”

“They had me in the hospital, stablised me for five days and then said, ‘look, we’re going to let the pain dwell down and once you’re stable, we’re going to get you home, see the kids for 24 hours and then we’ll bring you in for an operation.”

However, Storm’s health further deteriorated and when she woke up she couldn’t feel her legs.

She recalled: “Everything was completely numb, it was all gone. My legs, my bowel, my bladder, the lot. I quickly called my surgeon and said, ‘it’s gone, I’ve lost everything, I can’t move.’”

It was then that she was sent into emergency surgery and they discovered she was suffering from cauda equina syndrome – where the nerves compress at the bottom of the spine.

Storm said: “If left, you end up without anything. You’re in a wheelchair with nappies.”

Storm also detailed how her husband Ronan felt watching his wife suffer, revealing he cried as he felt so helpless.

She explained: “Because of Covid he couldn’t get into the hospital so all he was getting was me on WhatsApp, or me on the end of the phone speaking to the surgeon.”

“He was sitting in the carpark and just crying in the car outside the hospital waiting to hear how it would go.”

For more stories about Storm, her husand Ronan and their family, sign up to our daily OK! newsletter. Loose Women continues weekdays at 12.30pm on ITV