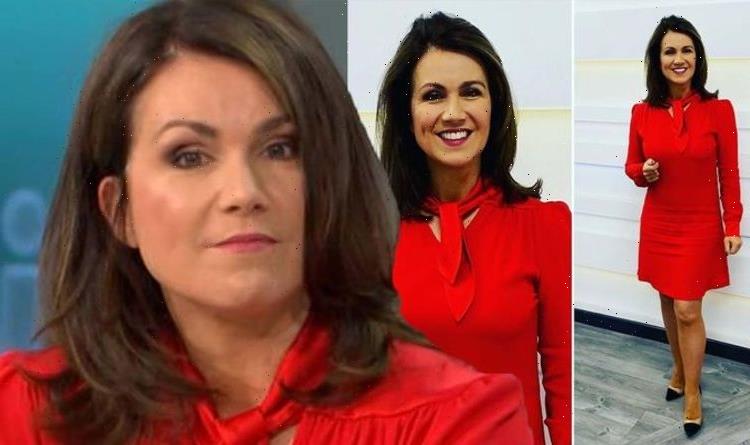 The star can be seen in a lovely long-sleeved red dress that featured a tie around the neck.

Susanna captioned the image in view of her 581,000 followers: “MONDAY!

Fans took to the comments section to weigh in with their thoughts on the presenter’s knee, with many believing they could see a face in it.

She captioned the collage: “She’s not wrong.”

Fans took to the comments to comment on the hilarious “teddy bear” knee.

Richardcorkill added: “Once it’s been seen, it can’t be unseen.”

Benr_pt commented: “You still look good even with the Teddy bear knee.”

Prior to this Susanna was the face of the BBC co-presenting BBC Breakfast from 2003 until 2014 alongside Bill Turnbull and Charlie Stayt.

Susanna shared her thoughts on Friday on the news that Meghan Markle was going to be doing an interview with Ellen DeGeneres.

The presenter discussed the news with her co-stars as she admitted it was “increasingly hard to defend” the royal couple amid their desire for privacy.

She said: “It sounds so simple but, look at their explanation…

“I don’t know, I find that it’s getting increasingly hard to defend.

“But their explanation is they didn’t want the kind of media coverage, the kind of endlessly critical media coverage that they were getting and with the undertones that Prince Harry and Meghan said there was around it.

“That they wanted to almost take back control, didn’t they?”