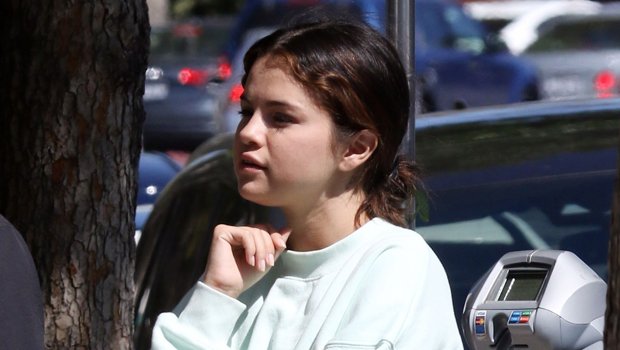 Selena Gomez stepped out in Los Angeles to grab some lunch with friends on May 24 and she looked gorgeous and comfortable in a mint green jogging suit.

Selena Gomez, 26, appeared to enjoy a fun and casual Friday afternoon with a couple of her friends on May 24 and she looked amazing while doing it! The singer bundled up in a mint green sweatshirt and matching sweat pants for the Los Angeles outing and was seen talking and hugging the people she was with while on the sidewalk near the restaurant. She had her hair back in a low bun and also sported white sneakers and shades. At one point, she was also seen in a car and didn’t seem to pay attention to the cameras around her.

We couldn’t help but notice that Selena looked happy and healthy during her latest outing and often sported a smile throughout the interaction with her friends. Her downtime comes when she’s otherwise been busy with her successful career. She attended the Cannes Film Festival in France on May 14 & 15, looking as gorgeous as could be in two different but flattering outfits. One was a satin Louis Vuitton white crop top and a matching long skirt with a high slit and the other was  a navy blue and gold pantsuit.

The brunette beauty’s appearance at the popular festival was to promote her upcoming film The Dead Don’t Die, which premiered at Cannes and hits theaters in the U.S. in June. Selena also has two other upcoming films on her radar, A Rainy Day in New York directed by Woody Allen, and The Voyage of Doctor Doolittle, which are both currently in post-production.

It’s great to see Selena’s career continue to thrive in both singing and acting. Although she hasn’t released an album since 2015, she has told fans that another one is on the way soon, and we couldn’t be more thrilled about it!