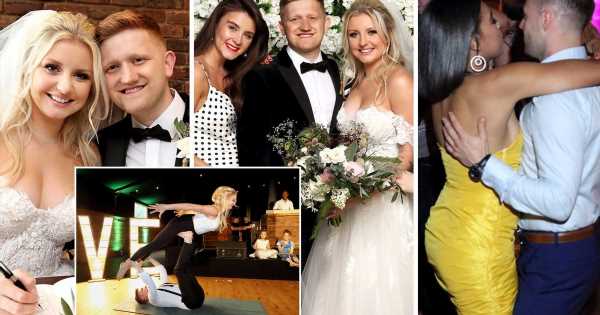 While Sam described the big day as “perfect”, while Briony confessed she “didn’t stop crying” the entire day.

25 year old Sam revealed he was gobsmacked when he saw Briony for the first time.

"When I turned around and saw Briony, I thought she looked unbelievably beautiful. The ceremony was a surreal experience – it was joy on the highest level."

Briony added: "The whole day was perfect. I didn’t stop crying! I didn’t think Sam would be as emotional as he was."

Briony looked beautiful in an off-the-shoulder dress, which featured a lace bodice and a large skirt with organza fabric.

Talking about her choice of outfit, the stunning yoga teacher revealed: "‘It was by Riki Dalal and was the first dress I tried on and I came back to it. I felt like the most beautiful person ever in it"

Sam looked dapper in a black suit, which he whipped off for the pair's very impressive first dance, while Briony changed into a white vest and leggings.

A complete showstopper, the couple embarked on a number of yoga and acrobatic moves to John Legend's Stay With You.

Despite the couple appearing controlled whilst they performed their impressive moves in front of family and friends, Sam revealed he almost "dropped" Briony at the end of it.

The pair exchanged vows in front of close friends and family, which they read off beautifully crafted cards specially made while using a gorgeous keepsake ring box.

The reception looked just as stunning as the ceremony, with their friends and family having a whale of a time, dancing and posing up for the camera.

The actor confirmed he was engaged to Briony back in June 2017.

The popular soap star proposed to his partner of five years at a charity golf day he runs with some Corrie co-stars.

After taking to the stage for a Mr and Mrs style game, Sam announced he had his own question to ask before proposing.

Speaking exclusively to OK! magazine at the time, he said: "The crowd starting cheering, although Briony didn’t actually say yes.

"She was so shocked she covered her mouth and started to cry, so I took that as a yes and put the ring on her finger."

Briony added: "It was [such a blur]. Everyone was cheering and screaming and I was smiling and couldn’t stop crying. Sam had tears in his eyes too.

"I would have never have imagined he’d do it in such a public place, so it was a complete surprise."

Corrie stars including Brooke Vincent, Jennie McAlpine and Andrew Whyment were all in attendance.