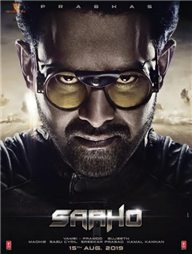 From a long time, Baahubali star Prabhas‘ fans are eagerly waiting to find out the latest update from much awaited movie Saaho and finally today morning Prabhas came up with Saaho Surprise. Today by releasing a new poster of Saaho, Prabhas confirmed the news that the movie will be released on 15th August 2019 on the occasion of Independence day.

Tuesday morning Prabhas took to his Instagram and wrote, “Here it is darlings, for all of you… The new official poster of my next film Saaho. See you in theatres on 15th August! #15AugWithSaaho”.

Earlier it was heard that Prabhas is dissatisfied with the way a few scenes have turned out to be. He had also asked Sujeeth to reshoot a few of these sequences and suggested some improvisations as well. This could also cause delay in the release of the movie. But finally the makers have locked the release date of Saaho.

Saaho is touted to be a spy-thriller, directed by Sujeeth Reddy and is produced by UV Creations on a huge budget of nearly Rs 300 crore. Shraddha Kapoor is playing the female lead whereas Arun Vijay, Neil Nitin Mukesh, Jackie Shroff, Chunky Pandey and Mandira Bedi will be seen in important roles.