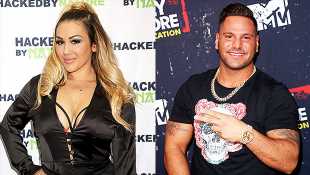 Ronnie Ortiz-Magro is warning his Instagram followers that they shouldn’t date idiots. Is he referring to his ex with that cryptic diss?

They’re on again and off again… and on again, and off again. And right now, it doesn’t seen like Ronnie Ortiz-Magro and Jen Harley are on the best terms. Two weeks after Jen was arrested on domestic battery charges from a New Year’s Eve fight with the Jersey Shore star, Ronnie posted a cryptic quote on his Instagram story that seems like it could be about his ex-girlfriend. “Date someone who has plans for the future, not an idiot that has plans for the weekend #growth,” the quote reads, and is accompanied by a pic of Kermit the Frog sitting on a stool. Maybe that’s his take on the “That’s None of My Business” meme? Ronnie’s point seems to be that you can plan to GTL on the weekends, but you better have bigger ideas than that, too!

Ronnie and Jen reportedly got into a blowout fight at the Hustler Club in Las Vegas on December 31 when Jen allegedly threw an ashtray at Ronnie, hitting him in the face and giving him a bloody nose. Ronnie filed a domestic battery report with the Las Vegas Police Department on January 3. They broke up following the incident, but made attempts at getting back together. They are firmly broken up right now. Jen was arrested on May 16 by the LVPD, who reportedly issued a warrant for her arrest on April 17.

The exes, who share a one-year-old daughter, Ariana, have a history of going after each other on social media, mainly through cryptic posts. Jen slammed Ronnie on Valentine’s Day this year for skipping out on plans to film a show. She wrote, “I’m sorry but if you go away for 6 weeks to become a better boyfriend, father, person, etc. to work on your family but you choose to cancel all of our plans on Valentine’s Day so you can appear on a dating show bc [sic] you need the money that bad over your family… your [sic] a joke… how did you better anything??” In the since deleted post, she also added, “You continue to put us back in the same position by doing the same things that put us there in the first place.”

And after he reportedly filed the police report about her after the New Year’s Eve incident, she posted, without naming names, “A narcissist’s response to your truth is filing a police report against you or taking you to court for the very things that they are guilty of.” After Jen’s arrest, Ronnie posted, “You’ll never change your life until you change something you do daily. The secret of your success is found in your daily routine” and “Change is coming.”