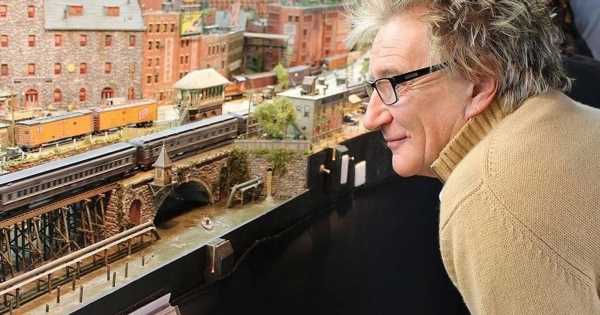 Sir Rod Stewart has donated £10,000 to a model railway club after its exhibition was destroyed by yobs.

The singer, a model railway enthusiast himself, said he was “absolutely devastated” for members who lost rare models and layouts that took years to build.

Sir Rod, whose set up took 23 years to build, said: “I feel their pain. The collection was priceless and I am donating £10,000 to help compensate those affected and asking fellow enthusiasts Jools Holland, Roger Daltrey and others to do the same.”

Vandals ran riot at a school in Stamford , Lincolnshire, on Saturday, where the Market Deeping Model Railway Club was holding its annual show.

The club said months of planning goes into the exhibition, adding some of the models on display were “irreplaceable”.

Sir Rod is said to be the proud owner of a model of New York’s Grand Central Station, complete with skyscrapers around it.

He spends up to four hours a day on his hobby.

“All the little guys in the engines are talking. It is unbelievable. It really is,” he has said.

Sir Rod previously revealed he requests a large table in his dressing room when touring so that he can make miniature buildings for his model train set.

The singer told US magazine Model Railroader, of which he was once a cover star, that he also never drinks before working on his hobby.

“I can’t build after a couple of glasses of wine – the results are never good,” he said.

Being on the cover of Model Railroader meant more to him than being on the front page of music magazines, he also said.

Sir Rod’s cash injection comes despite a history of being frugal with his money.

Britt Ekland described her former boyfriend as being “so tight-fisted it hurt him to go to the bathroom” while his fellow musician Ronnie Wood said that he was “tighter than two coats of paint”.

The club affected by the vandalism had been overwhelmed with offers of support and thanked well-wishers for their help.

The crowdfunding page to raise money for the exhibition had gained around £57,000 in donations, hugely over its £500 target.

Four youths were arrested in connection with the incident but have since been released on conditional police bail pending further inquiries.

Lincolnshire Police were alerted to the incident by a local resident when noises were heard coming from Queen Eleanor School shortly before 4am.