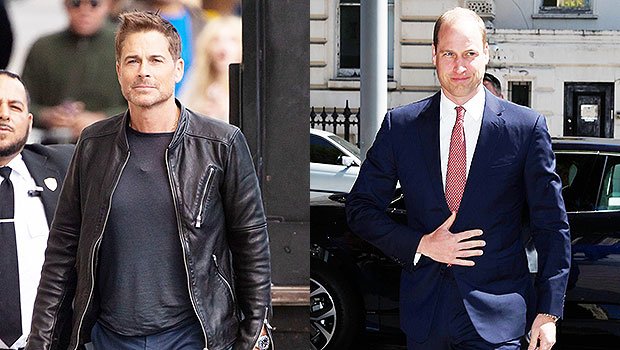 Rob Lowe poked fun at Prince William’s lack of hair when he called the future king of England’s transformation ‘a traumatic experience’ for him, in an interview with the ‘Daily Telegraph’.

Rob Lowe, 55, couldn’t hold back his opinions about Prince William‘s hair transformation over the last few years, in a new interview, and we have to admit, he was a bit harsh! The actor told the Daily Telegraph that he thinks the 36-year-old blond royal “Let himself go” after losing a significant amount of hair as he’s gotten older. “Honestly, one of the great traumatic experiences of my life was watching Prince William lose his hair,” he said in the interview. “He’s going to be the f***ing king of England!”

Rob, who stars in the ITV drama Wild Bill, went on to point out how he thinks British men “set a low bar” when it comes to their looks and he touched upon how he handled his own experience with hair loss. “And there’s a pill! The first glimmer that a single hair of mine was going to fall out, I was having that stuff mainlined into my veins. And that’s what I did for the next 30 years,” he explained.

William was known for having thicker hair when he was younger, but it’s noticeably thinned over the years, and although he’s joked about it on some occasions and hasn’t publicly expressed any desire to try and regrow it, it’s unknown whether or not he’s tried hair growth treatment. Since one of the factors of baldness is believed to be hereditary, we’re not so sure how much William could have prevented his thinning hair, so we say, go easy on him, Rob!

Rob’s take on Wills isn’t the first time he made headlines for calling someone out. In Jan. 2018, he totally slammed Bella Thorne, 21, after she tweeted a complaint about being stuck in traffic due to a mudslide that took many lives. “This attitude is why people hate celebrities/Hollywood. Bella, I’m sorry you were inconvenienced. We will try to move out our dead quicker,” Rob responded to her tweet. Bella later tweeted that she was unaware of the reason for the traffic and wished everyone safe. “F**k just caught up on some news had no idea why the 101 was shut down…get home to your family safe,” she wrote.