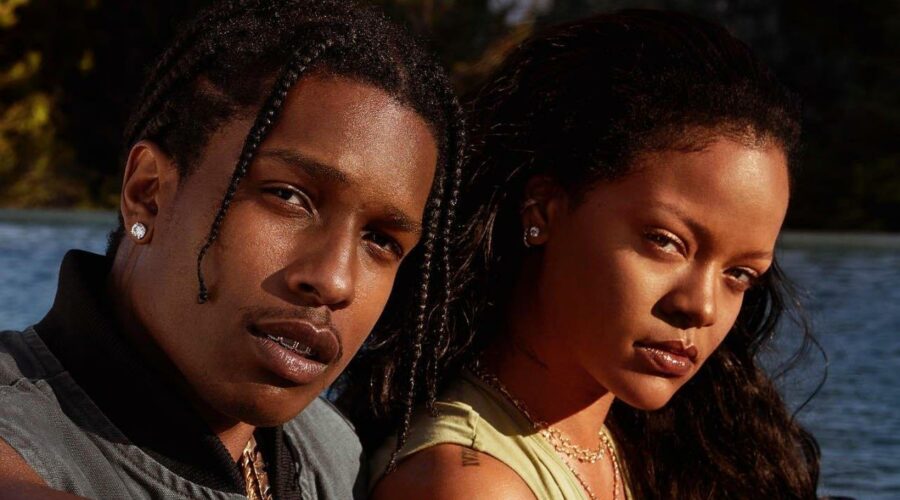 A supposed merchandise from the expecting couple’s celebration for their soon-to-be-born first child gives off a retro vibe with childhood photos of the mom- and dad-to-be.

AceShowbiz –Rihanna and A$AP Rocky may be having a baby shower after all despite his recent arrest. A picture of a supposed item from the couple’s planned celebration for the impending arrival of their first child has surfaced online, revealing the theme.

The photo, obtained by Onsite!, shows what looks like a white T-shirt of the “Rave Shower” that gives off a retro vibe, with Rih and Rocky’s childhood portraits printed on it. The names of the expecting couple were written on it with pink, blue and yellow hearts all around, seemingly to keep people guessing about the sex of the baby.

It’s unclear when the baby shower will take place or if the merchandise was prepared for the planned bash that was canceled after Rocky was arrested. Several days ago, it was reported that the Barbadian beauty had to scrap her plans to throw the baby shower at the last minute because of the rapper’s unexpected legal issue.

RiRi allegedly planned to host a celebration for the impending arrival of her first child with the rapper on Wednesday night, April 20 in Los Angeles, but had to cancel it at last minute after Rocky got arrested earlier that day. “It was meant to be Rihanna’s baby shower in L.A. on Wednesday night but they had to cancel,” a source told The Sun.

“Rihanna was there when Rocky was arrested and has been crying non-stop,” the source said of the singer’s reaction. “She’s heavily pregnant and these are very serious accusations, it’s a nightmare scenario for her.”

“Rihanna was very, very upset and stressed by Rocky’s arrest,” the informant further dished on Rih’s emotional state. “It’s not the best time for her to be on such an emotional rollercoaster.”

Rihanna and Rocky were later seen stepping out together for the first time since the arrest on Saturday night, April 23. The “Dont’ Stop the Music” hitmaker and her beau were photographed heading to Georgio Baldi in Santa Monica for a dinner date.