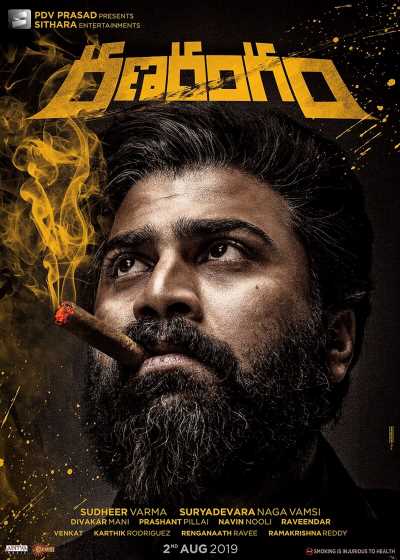 Kalyani Priyadarshan who is playing the female lead in Ranarangam, tweeted, “A tale of a man who grew to become an Empire himself, #RanarangamFirstLook is here. Here’s a small snippet of it: #Sharwanand @sudheerkvarma @MsKajalAggarwal @vamsi84 @Diva_DOP @iprashantpillai.”

That rave attitude of Sharwanand in the poster with the cigar will definitely give goosebumps for the fans. The rough look of Sharwanand sporting the beard is stupendous while the star’s intense expression is one aspect of his to die for. The intensity in his eyes catches the attention of viewers.

Reportedly, Sharwanand is playing two shades in this film and he will be seen playing gangster. Well, Sharwanand after back to back flops is coming up with yet another commercial film with Sudheer Varma. It is heard that Sharwanand is going to play the role of gangster in this film.

This is the first time Sharwanand is sporting mass look in his filmy career. Kajal Aggarwal and Kalyani Priyadarshini are playing female leads. The movie is directed by Sudheer Varma and is bankrolled by Sithara Entertainment banner.