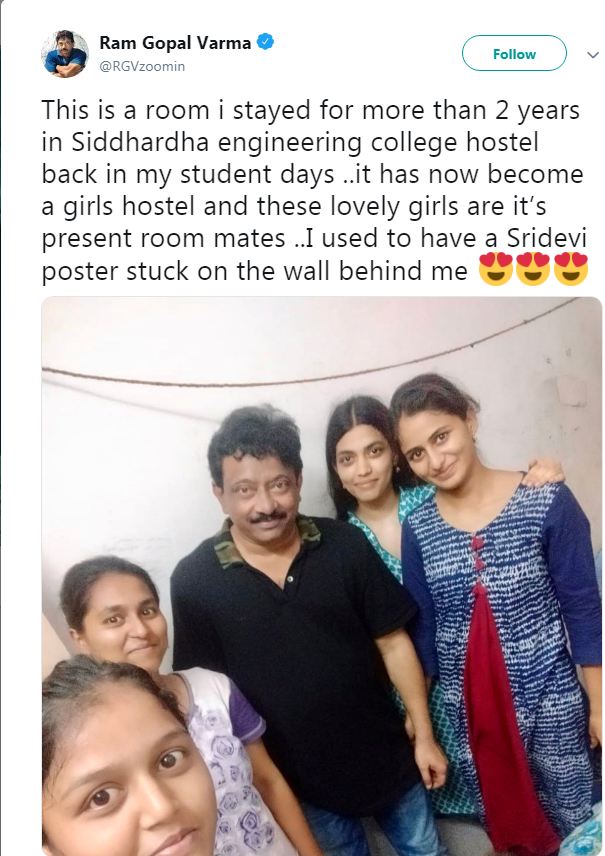 The controversial film maker Ram Gopal Varma took to his Twitter to share an old pic, in which he is seen with his girl gang. Currently Ram Gopal Varma aka RGV is in Vijayawada as a part of promotional activities of his movie Lakshmi’s NTR, which is gearing up for release in Andhra Pradesh.

Today morning Ram Gopal Varma posted a memorable snap along with some girls and said that the room he is standing was his hostel room where he spent more than 2 years. He also revealed that he used to have a huge Sridevi poster on the wall in his room. Now the same room has been transformed as the girls hostel. RGV tweeted, “This is a room i stayed for more than 2 years in Siddhardha engineering college hostel back in my student days ..it has now become a girls hostel and these lovely girls are it’s present room mates ..I used to have a Sridevi poster stuck on the wall behind me.”

On the other side, recently Ram Gopal Varma has also made official announcement regarding his next upcoming movie “Kamma Raajyam Lo Kadapa Redlu”. Few days ago, RGV confirmed the same via his tweet, “My next telugu film title is “KAMMA RAAJYAM LO KADAPA REDLU” ..It will be entirely shot in Vijayawada and Amaravathi and will be produced by Rakesh Ředdy in the same combination of #LakshmisNTR.”