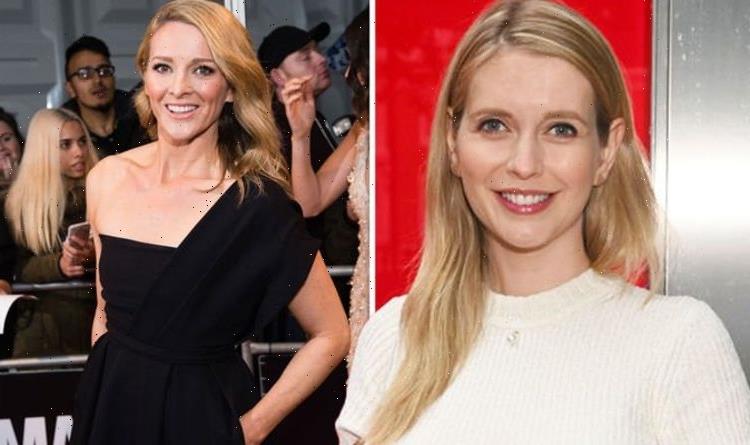 Countdown favourite Rachel Riley, 35, took to Twitter and explained her two-year-old daughter Maven mistook her for BBC sports presenter Gabby Logan, 48. The Channel 4 star, who welcomed her baby girl in 2019 with her husband Pasha Kovalev, said her little one called the Olympics host “Mama”.

Taking to the micro-blogging site, Rachel uploaded a picture from inside the BBC studios at Media City in Salford, Manchester.

The Countdown star explained that during her visit to the studios, Maven believed she spotted her mum in the snap.

In view of her 667,000 followers, Rachel penned: “Every day we’re at Media City my daughter points at this and says ‘Mamma!’

“If you ever fancy looking after a toddler @GabbyLogan she clearly wouldn’t notice the difference.”

The BBC star swiftly reacted to the post as she agreed to take on the babysitting challenge.

“What a compliment… I was only saying today I miss toddlers,” Gaby replied, in view of her 430,000 followers.

Rachel replied: “Sounds like a lie in to me. Deal!”

A third quipped: “Definitely a compliment to you both!”

While a fourth added: “That is hilarious.”

Rachel and her husband Pasha welcomed their daughter Maven in December 2019 shortly after they tied the knot earlier the same year in Las Vegas.

The couple are now expecting their second child this autumn.

In a candid interview, Rachel admitted that she didn’t want to leave it too late to have children.

“I’m 35 and I’ve got friends that are struggling with fertility, and you just never know if you’re going to be able to get pregnant, we have been really lucky, touch wood and we’re very excited,” she commented.

“They’re great, we weren’t sure if we wanted them before and we’re just both in love, it’s lovely.”

The married couple first met when they were partnered together on Strictly Come Dancing.

Rachel began dating him after her exit, which saw her come fifth place back in 2013 in the show’s 11th series.