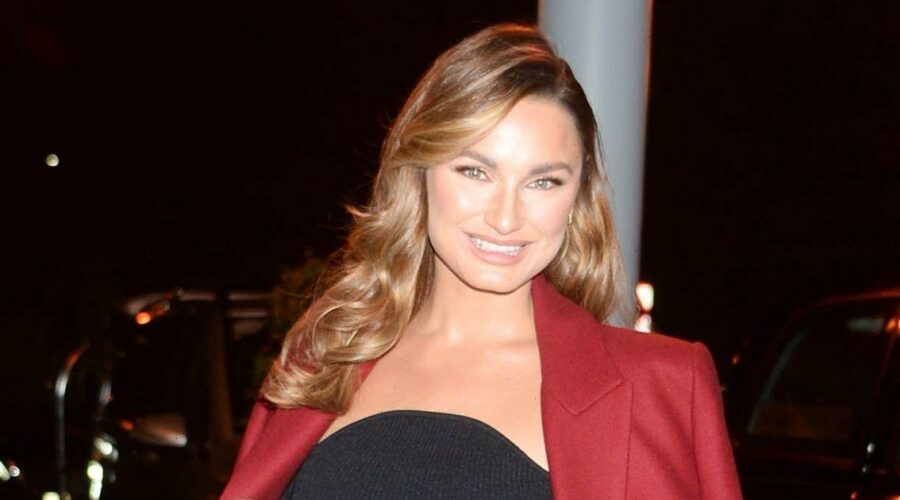 Pregnant Sam Faiers flattered her growing bump in a form-fitting black dress for a night out on Wednesday.

The mum-to-be looked stunning in a black off the shoulder dress teamed with a long red coat, strappy red velvet heels and a nude handbag, as she headed into the London’s Westminster Park Plaza to promote her new skincare range, Collagen Revive.

The outing came a day after Sam used her Instagram account to announce that she is expecting “a spring baby.”

Sharing a cute photo of five-year-old son, Paul, and four-year-old daughter Rosie kissing her bump, while partner Paul looked on lovingly, Sam said she was planning on keeping the gender of baby number three a surprise.

Writing on Instagram to her 2.5million followers Sam said: “Soon to be a family of five… We have a spring baby on the way. We are so happy and feeling so blessed… ps keeping this little one a surprise.” She ended the message with pink and blue love hearts and a question mark.

Friends and family quickly responded to the baby news. Sam’s sister Billie wrote: “I am sooooo excited to be an auntie again just the best news ever!!!! love you all sooo much.”

Sam and her partner Paul Knightly have been together since 2014, following her split from her ex-boyfriend Joey Essex.

During an Instagram Q&A Sam has talked about having a third child, saying that now as the perfect time to expand her family.

A fan asked: “Do you like the age gap between your kids? And would you want bigger if you had two more?”

Sam gave a very honest response: “Personally I found it a little difficult in the early days as I was breastfeeding Rosie whilst Paul was still in nappies and wanting my attention a lot.

“I wouldn’t change it for the world. But when we have more I think it would maybe be next year? Who knows… @PaulKnightly.”

Earlier this year Sam announced that she would be stepping away from her series The Mummy Diaries, which she appeared in alongside sister Billie as: “Now feels like the right time to step away and focus on new adventures.”

Keep to to date with celebrity news by signing up to our daily OK! newsletter.