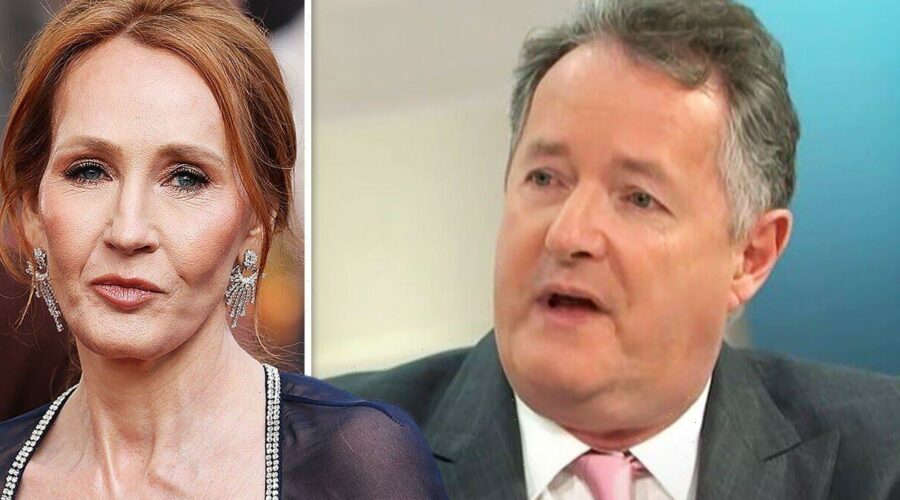 Former Good Morning Britain presenter Piers Morgan has defended Harry Potter author JK Rowling, insisting “she’ll survive” the attempts to cancel her following her remarks surrounding transgender issues and the definition of women. The former Life Stories host, 57, was speaking during the press launch of his new TalkTV show, Uncensored, when he insisted that like himself and his TalkTV colleague Sharon Osbourne, the Harry Potter author will survive being a victim of cancel culture.

When asked to address the difference between holding someone to account and calling for them to be cancelled, the outspoken TV star was quick to clarify the two.

Piers said: “You can hold people to vigorous account, you can be severely critical of people, I’m like that all the time.

“I don’t call for them to be cancelled.

“I don’t call for their lives to be ruined and then to be basically disintegrated in front of our very eyes,” he added.

“JK Rowling, she’ll survive the most appalling abuse and attempts to cancel her for having an opinion that she stands up for women’s rights.

“It’s appalling what happened to her, but we know where this line is,” he said to Huffington Post and other publications.

Earlier this this year, Piers put aside his feud with the author to defend the “cancelled” star amid the transgender row.

Piers branded the treatment of the author “an absolute disgrace” amid the backlash she is facing for airing her views on the on sex and gender.

He looked to the issue of the US transgender swimmer, Lia Thomas, who is set to become a world champion after having joined the women’s team, as an example.

The swimmer previously competed unsuccessfully on the University of Pennsylvania men’s team.

Piers branded the move “grotesquely unfair” in a new column but added that anyone who criticises the move is immediately branded “transphobic”.

The former Life Stories host looked to the case of Rowling as an example who has received death threats over the matter on Twitter.

Piers cited multiple instances of the author standing up for women’s rights, which saw her being branded a trans-exclusionary radical feminist along with receiving death threats and abuse online following her views.

Branding the author’s concerns “valid”, he explained: “However, for raising concern about the obvious dangers of allowing unlimited self-identity, JK Rowling was subjected to more disgusting harassment.”

He went on: “I have no reason to speak up in support for her. It’s her adherence to basic facts about biology that compels me to now stand up for her.

“I’m not a woman – but I know there’s a special place in hell for the women doing this to JK Rowling,” he wrote in his column for The Sun.

In 2020, Rowling took to Twitter to express her views over an article by Devex, writing: “‘People who menstruate.’ I’m sure there used to be a word for those people.

“Someone help me out. Wumben? Wimpund? Woomud?” she added.