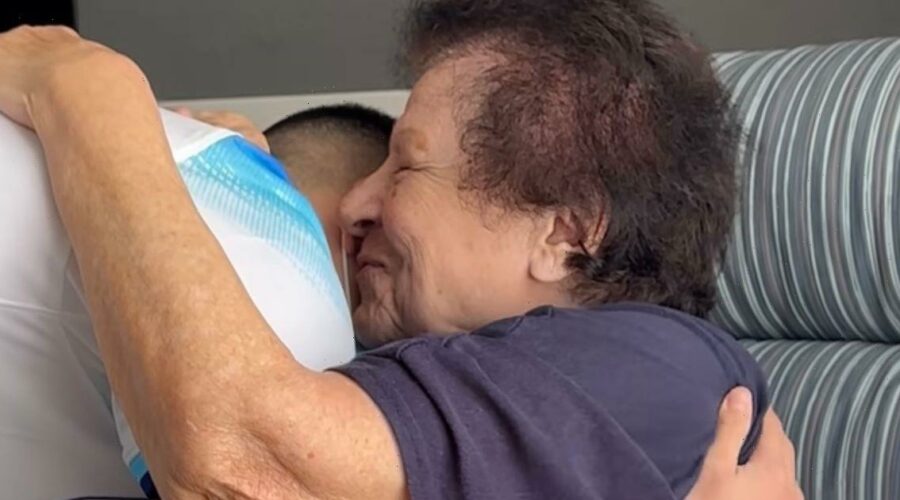 Peter Andre has shared a heartwarming video of his mum reuniting with son Junior in Australia amid her health battle.

The 49 year old had previously posted a string of sweet snaps of himself and his family – including wife Emily, 33, their children Amelia, nine, and Theo, six, as well as his kids Junior, 17, and Princess, 15, who he shares with ex Katie Price – after they flew Down Under to be with his elderly parents.

Revealing more special moments with his Instagram followers on Sunday, Peter uploaded a clip in which Junior can be seen walking towards his grandmother Thea, 86, as he greets her with a big hug.

She's heard saying: "Hello Junior," before the pair speak to each other in Greek.

"We love you mum," Peter wrote alongside with a love heart emoji. "Her reaction to junior is beautiful. Always asking about Bista. They always speak Greek together."

The singer had previously told his fans: "These last two weeks have meant the world to us. Mum, you have no idea how much we love you and Dad.

In snaps, Thea clasps her son's chin in one hand as they smile at each other, while another pictures sees his four children embracing their grandmother.

A third shows his wife Emily hugging Thea, and another shows the family all posing together.

Peter, who recently said he "can't bear to think" about his 50th birthday, shared his plans to spend more time in Australia with his parents.

He told MailOnline: "For me, it's about seeing my mum and dad and the kids and Emily seeing them. That's what it's about, they're getting very old now and it's always an anxious time of year.

"I went to Australia earlier this year, I'm glad to be spending more time there because of my mum now. So, I try and go three or four times of year if I can now."

And he previously spoke to OK! about his mum Thea's health struggles, revealing she was "struggling".

"My parents celebrated their 67th wedding anniversary last week. 67 years! It’s pretty amazing. Dad’s going to be 90 next year and mum’s 86," he shared.

"Mum’s struggling at the moment, though. She’s not doing great. She’s suffering a bit and declining."