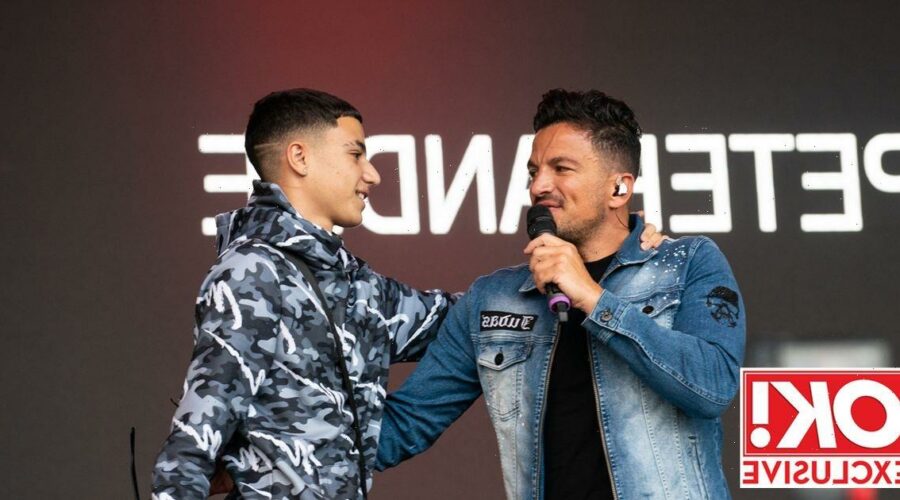 Peter Andre ’s son Junior is following in the footsteps of his dad after he signed a huge record deal back in August.

And now Peter, 48, has revealed he’s planning to team up with the 16-year-old, who he shares with ex wife Katie Price, 43, to record music.

In an exclusive interview with OK! alongside wife Emily, Pete told us he will be “overseeing” Junior’s career.

“I’ll be standing next to him the whole time and be his point of call!” he explained. “He’s very secretive about his music, but it is unbelievable. I’m sure you’ll all hear it soon.” He continued: “Our styles are completely different. He’ll appeal to a whole new generation and I’m more appealing to the older generation. We’ll do some stuff together too, but that’s for later rather than now.

“I just want to focus on him, get him off the ground and doing his thing. I’m so proud of him.”

Junior, who was seen singing along to his dad's song Mysterious Girl at Kisstory Festival, announced that he had “been secretly working” on the “massive project” with Columbia Records UK, who represent the likes of Harry Styles, in partnership with Rebel Records. Junior posted a picture alongside his father to his 458,000 Instagram followers as he thanked his family and friends for their support.

The teenager wrote: “Wow.. where do I start. These past 6 months have been hectic. But I’ve loved every single second of it. My dad took me to the studio 6 months ago and got me in the booth at @rebelrecs.

"Since then I have secretly been working on a MASSIVE project, and not long ago got a call saying @columbiauk want to sign me! I would just like to say thank you to the team @rebelrecs alongside my dad who have helped develop me into an artist.

"And of course a big shoutout to @skartist and @marcellonoego who are very talented and have been working with me on this project since the start."

He ended: "Also not forgetting my mum who is always supportive of me. And of course my family and friends. I love everyone who supports me and I am very excited to go on this journey with you all. NEW MUSIC COMING SOON!!"

Meanwhile dad Peter, who had three UK Number 1 hits with Mysterious Girl, Flava and I Feel You in 1996, also posted a very proud post dedicated to his eldest son.

He wrote: "It’s your turn my son. So so proud. 6 months ago when I took you into @rebelrecs and got you in the booth, I knew you would blow them away.

"You have worked so hard and your dedication is incredible. 6 months later you put your signature on a major label contract. @columbiauk. You’re gonna shine and I’m right here next to you all the way. Go go go."

For the latest updates on Peter and his family, sign up to our daily OK! newsletter.