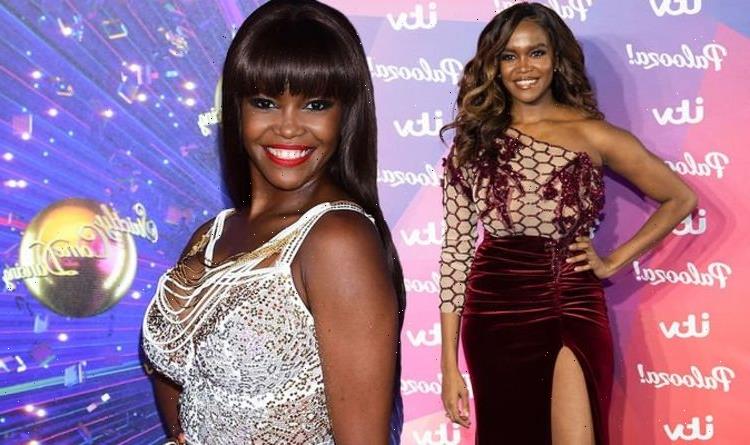 Oti Mabuse, 31, stunned her 635,000 Instagram followers with a sparkling snap, where she showed off her enviable curves in a skintight bodysuit. The glitzy picture comes amid claims that the star will leave Strictly Come Dancing behind now that she has become a Dancing On Ice judge.

In the photo Oti posted this afternoon, she can be seen wearing a purple, sequin-covered bodysuit, which she matched with a glamorous pair of golden high heels.

Next to the picture the dancer wrote: “Merry Christmas eve… May you have a splendid couple of days with your loved ones.”

Oti’s friends were quick to send in their Christmas well-wishes, as well as to complement the Strictly star’s outfit in the comments section below.

Many fans also sent in complimentary messages, including Liz Maitland, who wrote: “WOW! That jumpsuit is FABULOUS!!!”

Cindersinslippers added: “What a gorgeous outfit! It looks fabulous on you. Unfortunately on me I’d look more like the big purple one from a tin of Quality Street…”

Meanwhile, Emma enquired: “Please say it isn’t true that you won’t be back on Strictly!!!!”

This comes after the Metro.co.uk reported that fans are “unlikely” to see Oti return to Strictly now that she’s landed a judging gig on Dancing On Ice.

The star will be replacing John Barrowman on ITV’s celebrity skating competition in the series starting in January, after her successful previous stint as a judge on The Masked Dancer earlier this year.

Celebrity PR and Publicist Harry Rutter told the aforementioned publication that the huge leap from the BBC to ITV made him suspect that Oti would not be returning to Strictly next year.

Helen Flanagan surprised with HOUSE by fiancé after lie [INSIGHT]

He said: “I’m assuming Oti fancied a change of scene after doing Strictly for over five years and the ITV offer came just at the right time.

“I can’t imagine a return to Strictly after joining a primetime ITV show. There definitely comes a point where stars just fancy a change. It’s a deal that, if done correctly, works both ways for the stars and networks, almost like transferring audiences thanks to loyal fans and viewers.”

He went on to explain how rare an opportunity Dancing On Ice is for Oti, even if it means that she will leave some heartbroken Strictly fans behind.

“Moves like this don’t often happen, but it’s more than likely that a very tempting offer was put on the table by ITV bosses,” Harry said.

“It is very rare that talent would switch between BBC and ITV shows, this would have been an almost too good to be true offer for Oti – one she couldn’t refuse.”

Harry also mentioned that audiences are likely to tune into watch their favourite celebs, which will increase the popularity of the shows they appear on.

He said: “The Strictly star has over 635,000 loyal followers on Instagram who will all now, if they don’t already, be tuning into Dancing On Ice because they’re invested in Oti as a personality.

“This is a fantastic career move for Oti, landing on a new network with new viewers and increasing her overall following by appearing on an extremely well-known TV show with even more loyal viewers.”

Oti was paired up with rugby player Ugo Monye this year on Strictly after having previously won the competition for two consecutive years with soap star Kelvin Fletcher and comedian Bill Bailey.

Express.co.uk has reached out to Oti Mabuse for further comment.

Oti will join Dancing On Ice judges Ashley Banjo, Christopher Dean and Jayne Torvill in January, as the show launches on ITV.