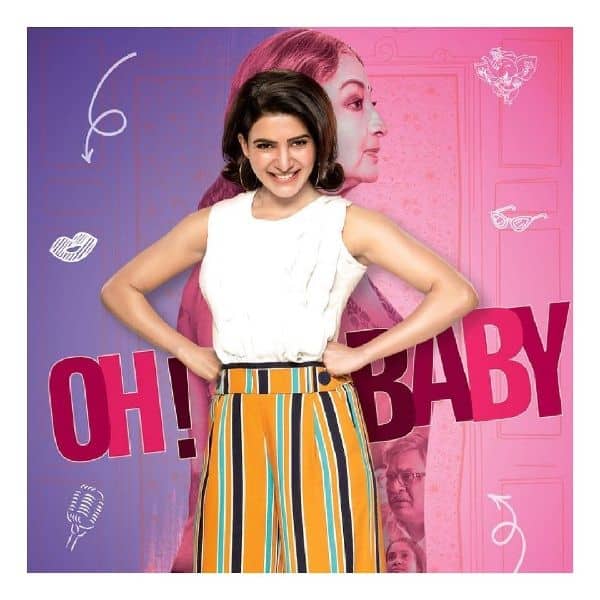 After a lot of anticipation and buzz, the makers of Samantha Akkineni starrer Oh! Baby have released the first look of the film and we must say it promises to be a light-hearted entertainer. Talking about the poster, we see a happy and chirpy Swathi played by Samantha Akkineni in the foreground and actress Lakshmi in the background. The film is inspired by the South Korean film Miss Granny, where an old woman miraculously turned into a young pretty girl. Oh! Baby is directed by Nandini Reddy and produced under the banners of People’s Media Factory, Suresh Productions and Guru Films. The film also stars Snigdha, Naga Shourya and Rajendra Prasad in key roles. The title of the film is inspired from Samantha and Ram Charan’s Rangasthalam’s song Yentha Sakkagunnave, which described her beauty

Congratulations to #sureshproductions on completing 55 years of an absolutely legendary journey. I'm very happy to be a part of their next. Here's introducing you all to #Swathi from #OhBaby @nandureddyy enjoyment maamul ga undadu?? @peoplemediafactory | @gurufilms1 .. releasing soon

A post shared by Samantha Akkineni (@samantharuthprabhuoffl) on May 21, 2019 at 7:00am PDT

Samantha Akkineni has enjoyed a phenomenal year with the huge success of Super Deluxe and her recent flick Majili opposite husband Nagachaitanya Akkineni. There are reports that the gorgeous actress will collaborate again with Vijay Sethupathi for Thuglak, which will be directed by debutant Delhi Prasad Deenadayal. The filmmaker has assisted directors like Premkumar and Balaji Tharaneetharan in the past and was the part of the big blockbusters.

Naga Chaitanya and Samantha Akkineni chill, wine and dine in Spanish making us so envious

Samantha has also come on board for the Telugu remake of Vijay Sethupathi and Trisha Krishnan starrer 96, which was one of the biggest Tamil hits of 2018. Sharwanand will play the male in the film.

So, have you liked the first look of Oh! Baby? Tweet to us @bollywood_life