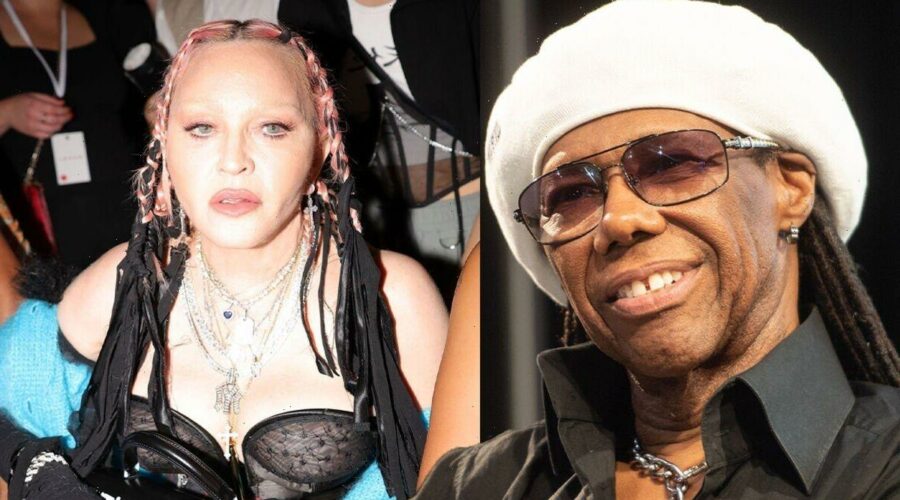 Madonna reveals that she regrets ‘both of her marriages’

Madonna, 64, is the talk of music today as she announced her Celebration Tour, with the singer doing 35 concerts around the world. Nile Rodgers, 70, solely produced Madonna’s 1984 hit Like a Virgin, with the musician recalling their first meeting exclusively to Express.co.uk.

I was the guy she wanted to work with!

Express.co.uk asked Nile how Like a Virgin came about, with the musician recalling their first meeting in a club.

When the pair met Madonna was in a relationship with DJ JellyBean Benitez, Nile’s friend and also the producer of Madonna’s first album.

Nile recalled: “I was going to see another artist entirely and Madonna happened to be the other artist’s opening act.

“I knew of Madonna because her boyfriend at the time was a DJ named Jellybean Benitez and I knew Jellybean.

“When he came out, I was like ‘wow, that’s Jellybean’s girlfriend, holy cow’.”

Nile then remembered going backstage to speak with Madonna, with the singer then asking Nile for his help.

He continued: “So I went backstage and started talking to her and according to Madonna she made her mind up right there on the spot that I was the guy she wanted to work with just from that chance meeting.

“Madonna was just starting and there’s a photograph of me and Madonna at a Duran Duran concert at Madison Square Garden.

“We’re just sitting in the audience, nobody knew who she was.

“But you won’t believe this, just a few months later she was headlining at Madison Square Garden.”

Madonna announced today her 40th-anniversary world tour with a very raunchy video, winking to her 1991 documentary film Truth or Dare.

Kicking things off in Vancouver, Madonna will visit multiple cities in the United States and Canada, as well as the United Kingdom and Europe.

Produced by Live Nation, the tour will kick off in North America on July 15th at Rogers Arena in Vancouver, BC with stops in Detroit, Chicago, New York, Miami, and Los Angeles.

She will then make her way to Europe where she will hit 11 cities throughout the fall, including London on October 24th, continuing onto Barcelona, Paris, and Stockholm, among others.

The Celebration Tour will finish in Amsterdam at the beginning of December.

Nile is currently promoting his most recent project, the Make It With Nile YouTube docuseries, where Samsung has partnered with the music legend to uncover new ways music is being made today.

He chats to the creatives about making it in music and how it’s changed over the years thanks to advances in smartphone technology, platforms like TikTok and opportunities like StemDrop.

Speaking on the project, Nile said: “I think it’s great, any form of reaching the public to me is fantastic.

“It’s easy to think about the possible negative stuff, but I’m not really like that. I always try to look at the positive.

“An artist can reach anybody out there, it’s amazing. It’s an amazing gift to me, that’s what we live for.”