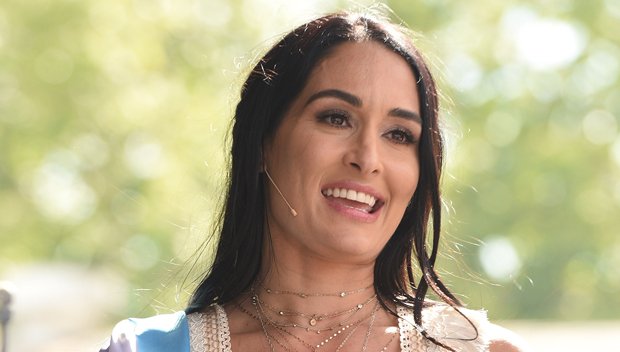 Nikki Bella is looking hella hot these days. She rocked plenty of cleavage in a deep cut sundress while on a romantic getaway to Napa’s Bottlerock Festival with her sweetie Artem Chigvinstev.

Nikki Bella is kicking off Memorial Day weekend in style and showing off her incredible figure at the same time. She hit up Napa’s Bottlerock Music and Wine Festival on May 25 and made sure all eyes were on her with the sexiest sundress ever. The white number’s plunging front went all the way down to her waist, showing off tons of cleavage. The skirt was equally sexy as it was make up of sheer white see-through fabric so her long lean legs could be seen with a just pair of white bottoms underneath.  Hopefully she wore plenty of sunscreen for the gorgeous Northern California day.

Even better Nikki has reunited with beau Artem Chigvinstev, 36, who came up to Napa the day prior to join her. She shared a sweet Instagram video waiting at the door of her cabin as his car drove up and she ran out and literally jumped into his arms the second he stepped out. “He’s here!” she captioned the video as she wrapped her legs around him and the two had the longest and most romantic hug. The professional dancer has been away in the UK for the last several weeks so it’s no wonder she was so happy to see her guy. Over on Artem’s page he showed how their romantic trip continued as they visited a winery and he planted a big kiss on Nikki’s cheek in a sweet photo.

It wasn’t all just love and wine for Nikki, as she had a dream come true by getting to participate in a cooking contest with two of Top Chef‘s most popular contestants ever, brothers Bryan and Michal Voltaggio. “So honored and incredibly happy to share the stage with these iconic brother chefs @bryanvoltaggio and @mvoltaggio Had so much fun on the @williamssonoma Culinary Stage at @bottlerocknapa!,” she captioned a series of Instagram pics cooking alongside Bryan while her twin sister Brie Bella, 35, had Michael for her partner.

After the cooking comp, Nikki showed off a series of IG pics at the festival where she and Artem were lovingly holding hands and staying so close to each other. “That’s a woman being loved the right way,” one fan observed in the comments while another wrote “I’ve never seen you happier and natural. Love looks good on you!” From the comments section of her post, fans were truly happy that Nikki has found romance again after the demise of her six-year relationship with John Cena, 41.

‘We are doing this for the peace of the country’

Why Is Shah Rukh Talking To His Shirt?