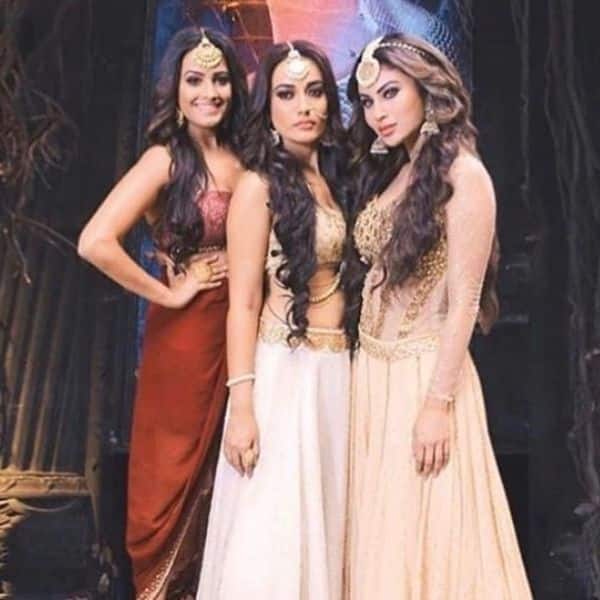 Yesterday’s episode saw the beginning of the great fight between Shesha and Shivangi and Shivangi even destroyed Shesha. but the question of where to find the real Ritik and Rocky stayed. Shivangi almost broke down in tears when Mihir brought an old Ritik and emtional Rocky who had been enslaved in the basement. Shivangi apologised for misunderstanding her father and husband. Ritik forgave easily saying she had a big heart and so didn’t come back for revenge.

And just when Ritik says he wants to die because he has no reason to live, Shravni stopped him saying she could get Shivanya back. Using the Naagmani, she brings back Shivangi’s mother. However, Ritik having grown really old, breathes his last in Shivanya’s arms. Ritik magically becomes young and he along with Shivanya bid farewell to all and disappear into another world. On the other hand Rocky pleads Shivangi to take him along with her to her world and she does so.

Shivangi, before leaving, hands over the Maha Naagrani crown to Shravni as she is now shraap mukt and Naagmani is shraap mukt as well. She announces Shravni as the new protector of Naag kul and Naagmani and Shravni accepts the full responsibility. Meanwhile just when Alekh and Rohini are trying to escape, Vishakha corners them and kills them with a bite.

However, Shravni and Vishakha, on a second thought, realise that there is more to this battle. Shravni explains to her how the motive of all the evil Naagins till now had never been only getting the Naagmani. There had been something else that they were looking for, hence they kept coming back. But Shravni is unsure what that motive is. So, she prays to Bholenath to show her the right path, and he does. He shows her the image of a 100 year old baba whom Shravni recognises as the all-knowing one. He tells her the real truth behind everything.

The baba reveals that many many years ago, during Sagarmanthan, their first Naagraj Maharaj Vasuki had helped the daanavs and the devs by acting as their rope. In return, he had not asked for anything, his sister who was the Naagrani then, agreed with her brother’s decision but some ku-sarps in the clan disagreed and tried to conquer the Naagmani and kill the Naagraj and Naagrani. But they did not manage it. Since then, the ku-sarps have been trying for generations together to get the Naagmani and destroy the entire kul of the then Naagrani. The baba tells Shravni that now her duty is to find and kill all the evil ones (Nidhog kul’s Naagrani, Sumitra, ku-sarp’s Naagrani, Shesha and demons’ Raani, Taamsi) to protect the Naagmani for the next 50 Pournimas when no evil power can touch it.

Meanwhile, Sumitra and Tanya aka Taamsi are alive and escape into the jungle. Shesha, who is still alive as well, joins the two to attack the Maha Naagrani again. but the new Maha Naagrani, Shravni is busy getting married to Mihir who was Bela’s husband in their past life as Mahir. But Sumitra, Tanya and Shesha walk in just before their rituals begin and demand the Naagmani. Shravni takes the three back to the Bholenath mandir and a fight begins between Shravni and Shesha, Sumitra and Tanya. This is when Shravni reveals the secret trikal trishul which the baba had given her to kill all evil. With this trishul, she slits the throats of Sumitra, Shesha and Tanya and kills them for good.

Shravni then places the trishul in front of the Shiva idol and puts back the Naagmani in its place. Vishakha and Shravni then get back to Mihir’s house where Shravni gets married to Mihir. Shravni is shraap mukt from last life when Bela had married a human and had become shraapit.

But the final big twist comes now. In a shocking revelation, Vishakha is shown in an evil light. Eyeing the Naagmani and the trikal trishul, Vishakha’s double headed-avatar throws all off guard. It seems her motives were never straight and all these years, she had been working towards achieving the Naagmani while pretending to be on the Naagrani’s side. She is also one of the ku-sarps and Shravni is clueless. With this the season ends. But leaves doors open for the next season when, after 50 Pournimas are over, Vishakha will catch Shravni off guard, kill her and take the Naagmani from this very place. Or will the Maha Naagrani find out about Vishakha’s truth? Well, we must wait for the makers to come up with the next season for that!

05/26/2019 Celebrity Comments Off on Naagin 3, 26 May, 2019 written update of full episode: Shravni becomes the Maha Naagrani and kills all enemies, safeguarding the Naagmani | Bollywood Life
India