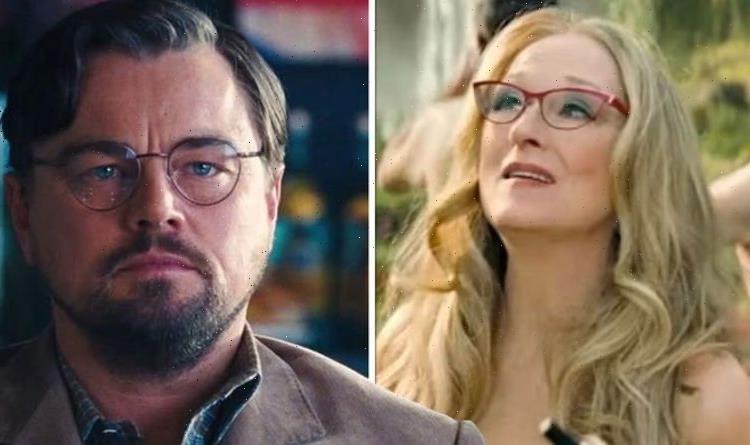 Protesting that Meryl Streep, who has now entered her eighth decade of life, is “film royalty”, Leonardo DiCaprio was reportedly keen to have the nude scene censored altogether. However it still appears, complete with a tattoo that many Don’t Look Up viewers are branding a “tramp stamp”.

You know who had a problem with it? Leo.

The satirical movie focuses on the lives of politicians akin to Donald Trump, while hapless scientists will be the object of mockery when they attempt to convince the government and public that the world is about to end due to a comet.

Amid all the chaos of the movie, Meryl, who plays President Janie Orlean, appears totally naked, all except for a prominent tattoo on her lower back.

Director Adam McKay revealed in The Guardian of the controversial scene: “You know who had a problem with it? Leo.

“Leo just views Meryl as film royalty… although maybe royalty is not a compliment… but as such a special figure in the history of film,” he explained.

He added that Leonardo had taken exception to seeing her walking around with a back tattoo.

Placing body art on the lower back often sees it described as a “tramp stamp” – and perhaps he was keen to protect the 72-year-old’s dignity and shield her from unwelcome comments.

“He said something to me like: ‘Do you really need to show that?'” Adam elaborated.

“I was like: ‘It’s President Orlean; it’s not Meryl Streep.'”

However, he recalls that Meryl herself was not offended by the nude scene and the satirical portrayal of the president at all.

“She didn’t even blink,” he exclaimed.

“She didn’t even bring it up. She is fearless.”

Meanwhile, though Leonardo might have been horrified, members of the public seemed greatly enthused when they took to Instagram and other social media sites to discuss it afterwards.

“They had Thee Meryl Streep butt naked with a tramp stamp and everything. Bl***y hell it’s the only bit I caught… Meryl Streep naked…. Quite the shock at teatime.”

She added, as if it was an afterthought: “The movie was actually really awesome!”

Meanwhile, other viewers reported that they were crying tears of laughter.

However, although many seemed to believe they were genuinely viewing Meryl’s nude form, they actually weren’t.

As it turned out, she was portrayed via the crafty use of a body double.

Meanwhile, DiCaprio has continued to fight Meryl’s corner and talk of his admiration of the star, telling Access magazine that the movie’s entire cast were “on their toes when Meryl walked in, as we should be”.

12/29/2021 Celebrity Comments Off on Meryl Streep, 72, stuns fans in nude scene that Leonardo DiCaprio tried to ban from film
India