Maura Higgins has spoken candidly about being sexually assaulted in a taxi when she was younger.

The star, who shot to fame in the 2019 series of Love Island, often speaks openly to followers on Instagram via regular Q&As.

These Q&A’s can range from what labels the reality star swearing to what type of birth control she is on, with Maura usually more than happy to open up to her fans.

On Monday, Maura, who is from County Longford in Ireland, launched another question-and-answer session as she walked in a local park, when a rather heavy question came up.

A fan asked the beauty out straight for her ‘worst encounter with a man’ – and Maura, like many women, had a story to tell. 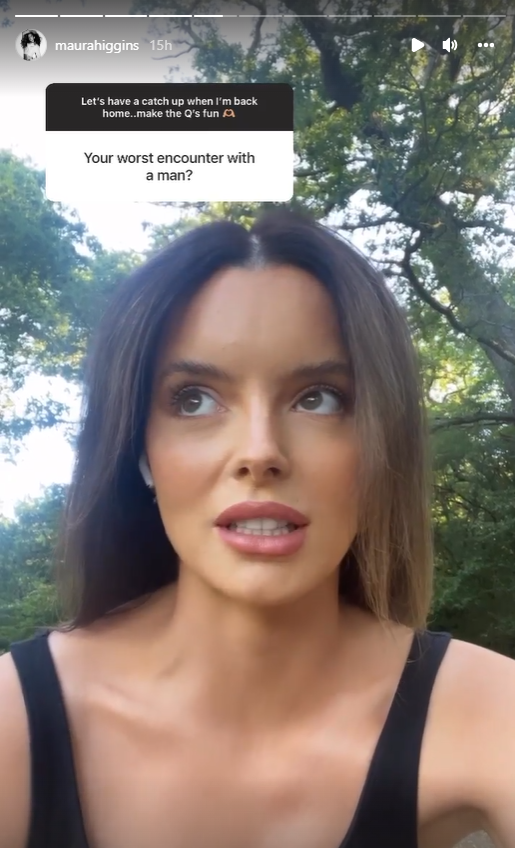 ‘The worst one I’ve never, ever, ever opened up to any of ye about, and I don’t even think I’m ready yet.

‘It was probably like, one of the scariest things that’s ever happened to me.’

While she wasn’t ready to tell ‘the worst one,’ Maura went on to open up about another horrifying experience, revealing she had been sexually assaulted by a taxi driver in Ireland.

Beginning the story, Maura explained it was ‘a long time ago,’ and said she fell asleep in the taxi, tragically adding: ‘Silly me.’

‘My friends were dropped off before me and I was being dropped off alone because I lived alone at the time,’ she said.

‘And I woke up and his hand was right up my skirt.

‘Honestly, I sobered up so quickly.’

She went on: ‘I memorised his taxi number so quick. And I still remembered it the next day.’

Maura’s story is, tragically, far from unique, with women across the world facing harassment or worse when simply trying to make it home.

Some 81% of the women interviewed said people had witnessed what had happened to them, but no one intervened.

Sexual assault and harassment continue to be a massively prevalent problem despite the #MeToo movement of 2017, with rape convictions in England and Wales dropping to a record low in 2020.

Recently, tennis coach Judy Murray – the mother of champions Jamie and Andy Murray – opened up about being a victim of an indecent assault herself.

She wrote in a column for the Sunday Post: ‘Towards the end of the meal, it was clear he had had quite a bit to drink and he put his hand firstly on my knee.

‘I didn’t know what to do so I removed his hand and leaned forward to pour myself some water and, as I did, he slipped his hand down the back of my trousers.

‘At that point, I got up and went straight to the bathroom. I wanted to throw up. It rocked me so badly.’

She added: ‘I spoke to nobody. The incident left me feeling sick to my stomach for a long time.

‘Women have found their voices and are calling out all sorts of sexist behaviour. It has given confidence to others to do the same.’

Victim Support offers support to survivors of rape and sexual abuse. You can contact them on 0333 300 6389.