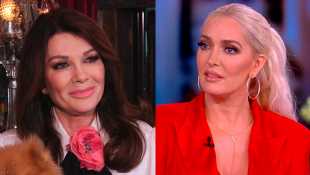 Lisa Vanderpump made a controversial remark about ‘RHOBH’ co-star Erika Jayne when she insinuated she is transgender while taking a lie detector test on the May 21 episode of the show.

Lisa Vanderpump, 58, is in hot water with some followers and Real Housewives of Beverly Hills castmates after making what some see as an anti-transgender remark about castmate Erika Jayne, 47, during her lie detector test on the May 21 episode of the reality series. In the episode, Lisa, who took the test to prove her innocence after the show’s infamous “puppygate” scandal, suggested that Erika, who is a woman, is transgender and tucks in her male body parts. “Just don’t ask me if Erika’s tucking or something like that because there are some things I can’t lie about,” she said during the test before leaning forward and laughing as Vanderpump Dogs executive director John Sessa sat beside her.

Lisa’s other RHOBH castmate Lisa Rinna, 55, took to Twitter shortly after the episode aired to call out Lisa and come to Erika’s defense. “Who knew Lvp was transphobic? Well, we know NOW! #LGBTQ,” her tweet read. Erika didn’t comment about the remark herself but did retweet a tweet about Lisa from fellow reality star Candis Cayne, who used to star on Caitlyn Jenner‘s reality show I Am Cait. “Oh come on @lisavanderpump joking about @erikajayne ‘tucking’ Ugly Trans jokes marginalizing our community are not acceptable. Being an ally doesn’t give you a free pass To make transphobic remarks. Do better,” Candis’ tweet read.

Since the episode aired and the numerous negative feedback was posted, Lisa has yet to defend her comment, but it will definitely be interesting to see what she says if she does decide to defend it in the future!