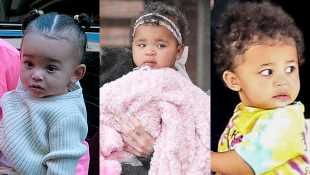 Kylie Jenner, 21, joked about how close in age her daughter Stormi Webster and her nieces True Thompson and Chicago West are when she posted two pics of them posing together on Instagram and called them “triplets”. In the adorable pics, they can all be seen sitting in a row on a couch while wearing matching light-colored clothing and holding onto stuffed animals. Chicago, who is on the left, is wearing a light pink short-sleeved shirt and matching pants while True, who is in the middle, is wearing a light pink long-sleeved shirt and skirt. Stormi, who is on the right, is wearing a white long-sleeved shirt and matching pants. “The Triplets 💗,” Kylie’s caption read.

All three babies are one-year-old now and were born within months of each other last year, so they are definitely reminiscent of triplets. Chicago was the first to arrive in Jan. 2018 and she was followed by Stormi less than a month later in Feb. Little True came into the world just two months later in Apr. Kylie’s sisters Kim Kardashian, who is the mother of Chicago, and Khloe Kardashian, who is the mother of True, couldn’t help but respond to Kylie’s pic with the doting comments, “My babies 💕” and “💕💕💕💕💕💕 My girls 💕💕💕💕.”

We look forward to seeing more pics of Chicago, True and Stormi as they grow up together! Since they’re all the same age, we’re sure they’ll spend many memorable and enjoyable moments in the future.