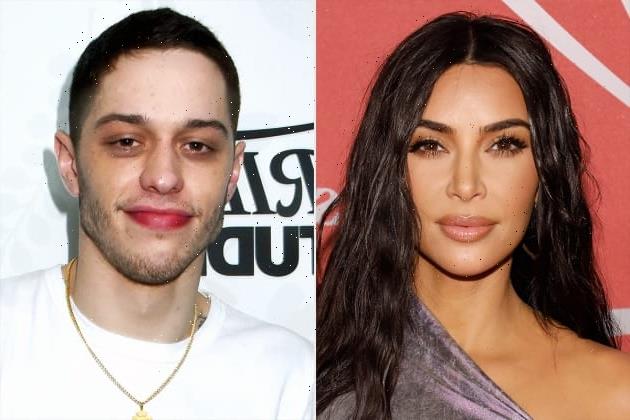 News of the couple is practically inescapable these days, as tabloids and social media users have been obsessing over one of the most unexpected celebrity pairings in recent memory.

That’s bad news if you’re Kanye West, who still appears to be hell-bent on winning Kim back.

But if you’re a fan of romance and unlikely couples, well, to paraphrase Pete’s fellow SNL weirdo Stefon, this story has everything:

Kim and Pete have been zipping past the usual relationship milestones in recent weeks.

Needless to say, these two are moving quite rapidly, and what was once looked at by outsiders as a casual rebound fling is now being taken seriously as a real relationship.

Pete’s probably not the post-Kanye partner most fans were expecting for Kim, but he’s clearly the one that she wants.

For many, the surprise comes not only from the fact that that these two are an item but from how rapidly they seem to be progressing.

In fact, several Kim fans have given voice to concerns that she and Pete are moving too quickly.

Some have even gone so far as to speculate that Kim has moved to Staten Island in order to spend more time with her new boo.

Obviously, this is a ridiculous proposition for a number of reasons:

For one thing, Kim has a life in Los Angeles, where she’s a mother of four, the proprietor of several businesses, and an aspiring lawyer.

So she probably won’t be uprooting for any man anytime soon.

On top of that, if Kim ever re-locates to the NYC area, you can be sure she won’t be setting up shop in Staten Island.

We’re sure you guys have plenty to offer, but Kim is a literal freakin’ billionaire.

The bougier parts of Manhattan are probably a little bit more her speed.

Once the internet settled down from the whole “Kim is abandoning her kids for the most budget of all the boroughs!” controversy, a new question arose:

Will Kim and Pete be spending Christmas together?

This one also shouldn’t be a big deal, but social media concern trolls did their thing, pretending to care that Kim might traumatize her kids by bringing a new man around for the holidays, especially so soon after her divorce.

Fortunately, the folks at People magazine have put a stop to the insanity by offering a definitive answer to the all-important question of whether or not Kim’s kids will have to open presents in the presence of a skinny tattoo bro.

So now you breathe easy, folks — it seems that Kim and Pete will not be spending time together on December 25.

“She had a good trip to New York,” an insider close to the situation tells the magazine.

“Pete took Kim to some of his favorite places. She had fun. Kim is celebrating Christmas with the kids and won’t see Pete.”

But if you thought that means these two might be entering a cooling off period, think again!

“He’s so into her and is always ‘my girl’ this and ‘my girl’ that,” the source says of Pete’s infatuation with Kim.

“He’s exactly what Kim needed after her divorce — someone to make her laugh and just have a fun time with,” the insider added.

“The end of her marriage was a very dark time for her and Pete has been the best antidote.”

Hilariously, these two have yet to publicly acknowledge that they’re dating.

Although they have entered the stage where they’re willing to publicly joke about their relationship in a sly, winking fashion.

During her recent appearance on Bari Weiss’ podcast, Kim was asked to name her favorite SNL cat member.

Similarly, Pete appeared on Seth Meyers’ late night show a few weeks back, and he teased viewers with a major announcement.

“I want to address something,” Meyers said.

“I feel like I want to confirm if it’s real or a rumor. This is something you’ve been reading about a lot in the press.”

“I’ve been wanting to talk about this because there’s a lot of people I walk by, people are like whispering and making eyes at me. But it is true,” Davison replied.

“I do have a show on Tubi coming out.”

So yeah, Kim and Pete are much more than just friends with benefits, but they’re not quite at the point where they’re willing to tell the world that they’re officially dating.

The reason for this hesitance is unclear.

Whatever the case, the important thing is that Kim has upstaged Kourtney’s relationship with Travis Barker, thus once again cementing her place as the most famous sister.

12/23/2021 Celebrity Comments Off on Kim Kardashian: Ditching Her Kids to Spend Christmas With Pete Davidson?
India